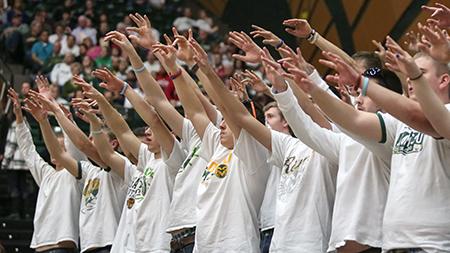 Students raise their hands during a CSU free throw at Saturday nights game in Moby Arena. Students can now pick up tickets up to three days prior to games or print them at home.

According to an email from Tim Brogdon, director of Ram Ruckus, students can buy tickets to men’s and women’s games three days in advance at Moby Arena or online at www.ramruckus.colostate.edu for an extra $2.

Brogdon wrote that the university isn’t making any money off of the $2 fee, which is an added charge put in place by their ticketing company.

“I think it’s one of the best things that I’ve seen the ticketing department do,” said Taylor Jackson, director of student services for the Associated Students of CSU, whose department is helping CSU athletics advertise its new policy.

Jackson explained that it makes ticket purchasing for basketball games more similar to the system in place for football games, where students can easily buy vouchers in the days leading up to the game.

With basketball, she said, students had far more difficulty getting tickets.

The arena also recently created a new student entrance on its south side.

“This entrance will serve students much better as all student initiatives and promos will be through this entrance,” Brogdon wrote.

Ram Ruckus is a student spirit group that launched in June 2012, according to the Rams Athletics official website.

News Editor Andrew Carrera can be reached at news@collegian.com.