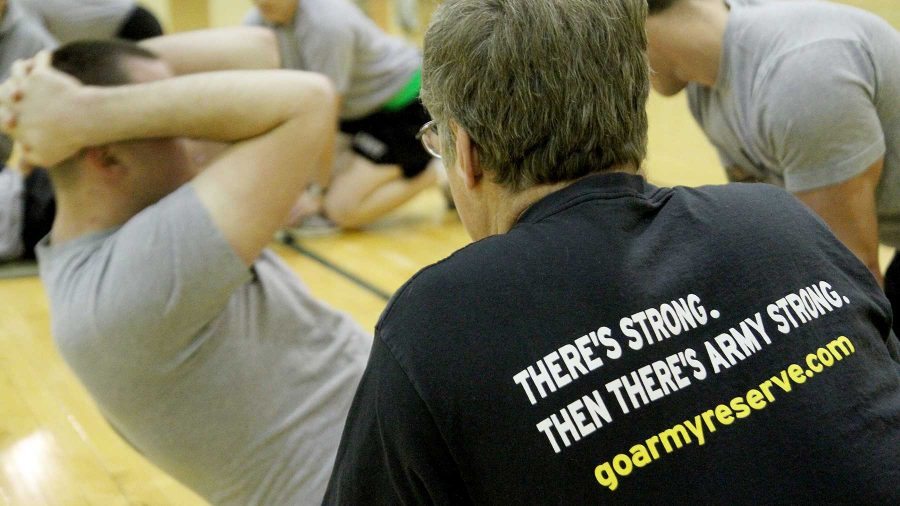 Colonel Retired Harold Johnson looks on and encourages a cadet in the ROTC to do his best at the physical fitness test in an auxiliary gym by Moby early Monday Morning.The ROTC is required to work out at 5:30 AM every Monday, Wednesday and Friday.

Each ROTC student must find within him or herself the motivation to excel in a test of sit-ups, push-ups and a 2-mile run.

“We don’t let up, we don’t stop, we are never good enough,” Moose said.

Even if the students “max out” their fitness scores, they are expected to continue to work even harder, Moose said.

The students who are attracted to this disciplined environment were found to possess common incentives in choosing this career path.

Junior Alex Coslow joined ROTC because he wanted to serve his country.

“Camaraderie is probably my favorite aspect of it,” Coslow said. The knowledge that his buddies will also be up early by his side motivates him to work hard.

Senior Kraig Bergner said that the military has always been a part of his family and he likes the challenge the program presents.

One of the few girls present at the test Monday morning was senior Erica Wade. Wade explained that the standards are the same for the women of ROTC.

“We’re definitely in a man’s world but I think women are making large headway in the military and making a good name for themselves,” Wade said.

Wade said she is looking forward to using the skills she has gained from her ROTC experience in a civilian career, while serving once a month for the U.S. National Guard.

Lucas Musseau, who has already served for four years in the Army, decided to join CSU ROTC so he can become an officer through the Green and Gold program.

Musseau said that while it is hard for him to adjust now without the structure of the Army, his younger peers have a great attitude about everything, which makes it easier.

Musseau said that his fellow students are gaining important lessons from his previous experiences, but they are also teaching him a lot of stuff that he had no idea about in the Army.