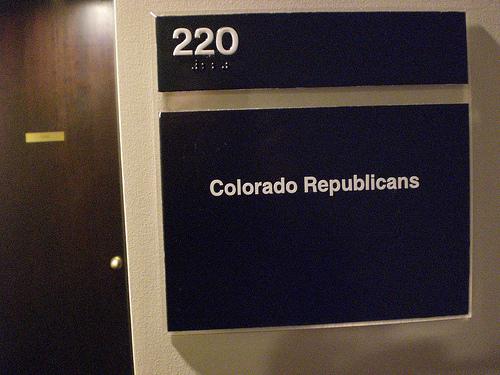 Republicans watched in stoic silence as FOX News announced Obama’s victory. The room quieted as attendees watched screens where pundits explained how Obama won and watched as Democrats in Chicago cheered and rejoiced.

Attendees came hoping to rejoice as Romney sealed the presidency and even though they lost the race, for some, the day would still be remembered as a victory.

Senators, their families and other Republican attendees gathered in a skybox overlooking the Mile High City’s football field. Groups of attendees stood around small tables set up through the room, ready to celebrate Romney’s victory.

Senator Mark Scheffel came with his wife and two daughters. Scheffel is up for reelection in District 4. Today his eighteen-year-old daughter voted for the first time and had the unique experience of voting for her father.

Maria said she remembers her parents would bring her with them into the voting booth when she was a child. She said she was taught the value of voting at a young age and knows that having the right to vote is a privilege. Looking out over the football field where the Broncos have brought home so many victories, Maria said she is excited to see her dad bring home his own victory tonight.

Maria’s mother, Cheri Scheffel, supported Romney because she thought he was the candidate that would provide a better future for her children.

“I would much rather see Romney as President because I feel like he can give more and provide more opportunities,” Scheffel said. “If you’re an American citizen voting is a privilege that people have died for. It may seem like your one vote doesn’t count but if we all felt that way none of us would be voting. It does matter.”

“Obama is taking us to failure,” McCormick said.

McCormick identifies himself as a conservative. As such, he disapproves of Obama’s agenda that has increased government influence. “Big government costs more. I want a limited government, individual freedom, personal responsibility, strong military, free enterprise and Obama doesn’t support any of that,” McCormick said.

Outlining the economic problems in America, McCormick made an analogy.

“If we want more and more people in the wagon pretty soon there won’t be enough people to pull the wagon and the United States will be history,” McCormick said. “That would be a real sad situation.”