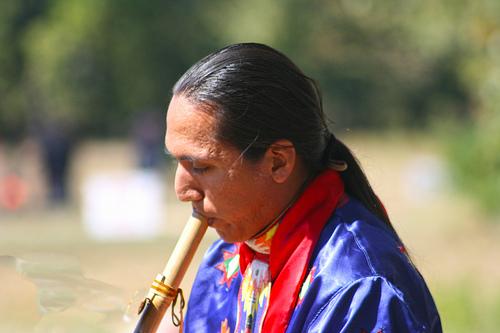 CSU’s system has always allowed students to check more than one race or ethnicity, and used an algorithm to assign those students to certain areas so only one number was reported to the federal government. In 2010, the federal government changed the way students report their race and ethnicity, and also added a new “Multiracial” category. Before the new rule, a student who identified as both Hispanic and Native American would be reported as Native American; now, that same student would be reported as Hispanic, according to Mary Ontiveros, VP for Diversity.

“It’s not that we don’t have the same numbers or comparable to what we had, but the way they are reported is different,” Ontiveros said. “…It appears we have fewer Native Americans when in fact it’s a function of the reporting process that has made that drop seem more significant.”

The FactBook reflects the numbers given to the federal government, and while it serves as an impetus to increase enrollment of Native American students, it is an uphill battle, according to Onitveros.

“The challenge with [the new reporting] is that it really raises a flag to say, ‘What’s wrong, why has there been such a dramatic drop in the native enrollment?’” Smith said. “That was a concern of mine when we went to these new federal guidelines because how does that look to a student that’s considering coming here if they were to look at those numbers and say ‘What happened to all the Native students? Is there not enough support for them? What happened?’ So that was my concern: what does that look like from the outside?”

The NACC works with the office of admissions to educate prospective students about the climate of CSU, and uses recruitment as an opportunity to explain the misleading enrollment numbers and the campus resources available for Native American students, according to Smith.

CSU’s Board of Governors approved the Native American Legacy Award in May 2011. The award allows non-resident students who are registered with tribes that have ties to Colorado to pay only $500 more than resident tuition, according to Ontiveros.

Once students are on campus, the NACC is also able to access information for those who self-identify as Native American in order to reach out to Native students.

Part of NACC’s goal is student retention and cultural awareness on campus. The Eagle Feather Tutoring Program is a service NACC provides for all students and has a direct impact on retention, according to Smith. The North Star Mentoring Program also helps retention by matching incoming Native students with mentors to help with adjusting to college.

“If you come to a campus like CSU and we have such a small number of Natives on campus, it is challenging because you don’t readily see others like you, and if you’re in a class setting you may be the only Native student in that class,” Smith said.

“Some people think we’re only here for native students, and we are,” Smith said, “but at the same time, the retention of all students is our priority.”

Willie said he believes the Native American enrollment at CSU needs to increase, and that the increase would show that CSU is making efforts to recruit Native American students, especially since on-campus support for Native students is strong. Having programs available that focus on Native ideas and issues can help attract prospective students because it shows that support exists.

“We’ve struggled with membership — part of building that is the more students we have, the more critical mass we can create to get more people involved and start talking and educating people about the Native culture,” Willie said. “… A lot of us want to share it as much as we can.”