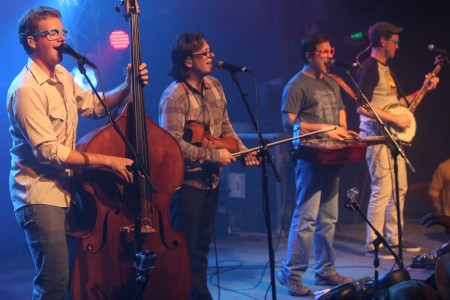 The left brain and right brain are considered to be something akin to opposites in our society. The former is dominant among mathematicians, computer scientists, accountants and engineers. The latter belongs to designers, fitness instructors, artists and musicians.

Or so people think.

“We want to be proof engineers are creative too,” said Jason Prapas, a member of the band Ambassador Wolf (not to be confused with Wolf Ambassador).

“Creative” is certainly the word for four grown men who howl during performances and wear oversized wolf heads, though said headwear took engineering skills as well; the band made them themselves, using bike helmets and chicken wire. They don’t wear them while performing, though that’s “in the works.”

The band is described by its fans as indie, folk, and gypsy rock [sic], but Prapas said, “We never intended to have a specific genre.”

“My dad’s Greek, and his side of the family is mostly Greek,” said Prapas. “We unintentionally have melodies I grew up with, and influences from gypsy rock.”

“I like to think I can bring in instruments that are not typical for this area, like a bouzouki. I want to bring in an accordion, at some point.”

Prapas began playing the piano his family inherited from his grandmother in third grade, later followed by his first guitar.

Prapas has been playing with another member, Marc Baumberg, for about a year and two months now.

“We started in pieces,” explained Prapas. The four met through their work at the Engines and Energy Conversion Laboratory at CSU.

Baumgardner said, “Jason and I’s desks are right next to each other. He tried open mic night and hated it. I was like, ‘I can play guitar a little bit.’” And so the two teamed up.

Baumgardner said, “I started playing 10 years ago. I was, you know, I did my undergraduate in Georgia, and I was sitting around one day, when I thought, ‘I should learn to play guitar.’”

Another member, Caleb Elwell said, “I grew up playing guitar, picked up bass, so that’s about 10, 11 years. And I’ve been playing cello about four or five.” He also described himself as the “rhythm section” for the band; originally appointed as a temporary tambourine player nearly a year ago, it’s safe to say he’s there to stay.

The last member, Tim Vaughn, joined three months ago. “I don’t want to say,” Vaughn protested, but he reluctantly admitted, “I started playing in fourth grade, so that’s about… 21 years.”

“That should be the headline,” Prapas joked. “‘Ancient musician has been playing music longer than college students have been alive.’”

But of course, the four have day jobs as well. “[It] allows us to be free with our music,” said Prapas. “We’re not counting on music being our life; it’s not the main object.”

Their jobs are about as left-brained as you can get.

Baumgardner said, “I work at the Engine’s lab. As a group, Caleb, Tim and I focus on combustion. I work with liquid fuel combustion and biofuel, kind of the next generation of engine design.”

Vaughn does “combustion studies on simulated fuels,” or as Elwell described it, “You shoot lasers at fire.”

Prapas said, “I work on energy devices for the developing world, like burning human waste in a toilet.” He added, “That kind of makes for some dreadful work days.”

“The point is to keep diseases from spreading.” Prapas’ work involves a fair amount of travel, which he said provides some inspiration for their music.

Elwell said, “I also work with liquid fuels, though more on the cold temperature properties. Some biofuels have problems with solidifying at low temperatures,” a problem which Elwell is working to rectify.

Between the four of them, they said they’re trying to make the world a better place. This is a sentiment that doesn’t end where the music begins.

Prapas said, “We’re working to bring our light to the world.”

He explained, “I used to work in the oil industry, and I remember very clearly being in China and seeing this poor guy swimming through an oil slick, trying to catch fish for his dinner. I mean, oil is necessary, but if I have the means to do better, I have a responsibility. And that’s true of all of us.”