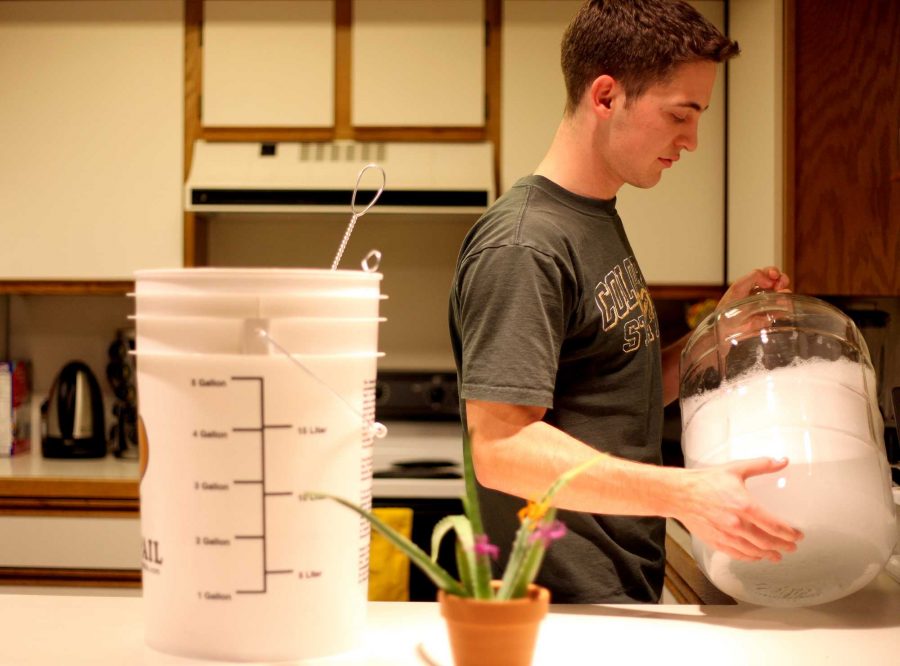 CSU senior Michael Miller cleans a tub used to help ferment beer. Miller, and several other CSU students have began to brew there own beer.

With multiple brewing companies in Fort Collins, it is no secret to students at CSU that beer is a big deal in the city. New Belgium, Odell, Equinox, Coopersmiths and Pateros Creek are just a few of the breweries in the area.

That has sparked interests in many students at CSU to start brewing their own beer at home.

Students have learned to brew the old-fashioned way, but have also learned about brewing from a course called Brewing Science and Technology (FTEC 460) at CSU.

The course teaches scientific and technical aspects of brewing, fermenting, finishing and evaluating microbrewed style of lagers and ales.

Luke Schwerdtfeger, Chris Holt and Michael Miller are a few of the many home brewing students at CSU.

Schwerdtfeger started brewing about two years ago in his home in Fort Collins. He learned to brew not from taking FTEC 460, but instead, from Tony Rau.

“A good friend of mine, Tony Rau, is an assistant brewer at Odell,” said the senior biological sciences major. “He was the TA (Teaching Assistant) for the brewing sciences class at the time and he said, ‘Hey man, we’re home brewing this weekend, do you want to come?”’and I said ‘sure’ and the rest is history.”

Schwerdtfeger learned from Rau by sitting down with him and learning it step by step.

Holt later came in six months ago to brew with Schwerdtfeger and then Miller.

“The first time I home brewed was with Luke about a week ago,” said the senior biomedical sciences major. “I took the class expecting it to be kind of a home brew class but it was all about the industrial side, which was great because  it taught me all about the chemistry and all the stuff behind it. So whenever I brewed with Luke … I knew exactly what he was talking about and so it was more direct and really easy to pick up.”

Each brew day takes about three-and-a-half to five hours depending on how quick you are doing it or how rushed you are, Schwerdtfeger said.

“From the point of starting it [a brew] to drinking a finished beer is roughly about  four weeks,” Schwerdtfeger said.

They have no plans to start a brewing company in the future, but instead are concentrating on their studies.

New Belgium and Odell brewing companies both have their roots as home brewed beer.