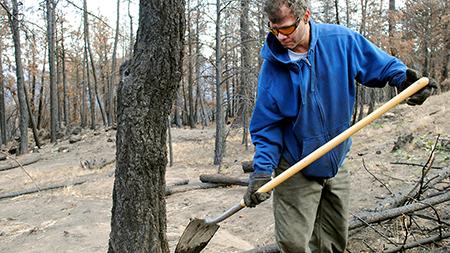 Pedro Boscan, a Colorado State professor, cleans up the remains of his house after the Rist Canyon fire. Boscan is rebuilding his house with help from neighbors in the community.

What was once Pedro Boscan’s home is a giant hole in the ground, surrounded by charred trees that used to be a dense forest. Now the forests’ remnants barely conceal the view of a road and other houses thanks to the summer 2012 High Park Fire.

“The reason we moved up here doesn’t exist any more,” Boscan said, who works as a volunteer firefighter and associate professor of clinical veterinary science at CSU.

The blaze burned about 89,000 acres by the time it was extinguished. Since the disaster, some areas that were less burned experienced some regrowth and ground cover, while more severely burned areas have been sterilized by the fire. The total structures lost in the fire totaled 274, according to Bob Gann, fire chief of the Rist Canyon Volunteer Fire Department.

Boscan’s home burned the second day of the fire.

“It is heartbreaking to the point that for me as a volunteer firefighter, if another fire comes through here I’m going to come to my house. I’m sorry for all my neighbors and the school and anyone else, but I am never going to do this again in my life.” Boscan said. “… I’d still be a firefighter, and I like it and I want to help others, but I will not sacrifice my house ever again.”

Boscan is underinsured by about $100,000 and is doing much of the rebuilding work himself, including removing dead trees and controlling erosion by planting seeds in the area. Work on his property and at the university is equivalent to two full-time jobs, he said.

Before the fire started, Boscan, his wife and some friends were supposed to go to Beaver Creek for the Tough Mudder run. Instead, they had to evacuate and Boscan was fighting the fire in another area when his house burned. The news was “demoralizing” and “extremely frustrating.”

Boscan estimates that based on the work and money put into his original house and what he received from his insurance company, he lost $150,0000 to $200,000.

Boscan was not the only CSU professor affected by the fire. H.J. Siegel, Abell Endowed Chair Distinguished Professor of electrical and computer engineering and professor of computer science, began volunteering for the Rist Canyon Volunteer Fire Department shortly after moving to the area in 2001. His goal was to get involved with the community and he said he never expected to deal with a fire of High Park’s magnitude.

The defensive measures Siegel learned from the fire department helped protect his home during the High Park Fire. He made sure trees were cut away from his house and that the building’s materials were non-flammable.

Boscan’s property also had defensible space and his home would have survived if his neighbor’s trees, which were close to the house, had not caught on fire.

The only thing Siegel lost in the fire was his refrigerator, which was filled with food that spoiled when the power was off for 20 days.

“My job was fighting the fire, not dealing with my refrigerator,” Siegel said. “I ignored my refrigerator and personal items like that. I was up here to help make sure no homes burnt down and protect other areas … We got off very easy compared to those who lost their homes.”

Although his home was not affected, about one-third of Siegel’s 35 acres burned, and his rebuilding involves cutting down burned trees and re-seeding the area. He considers his life to be “pretty close to normal.”

The RCVFD did not try to extinguish the High Park Fire because it was so large, and instead had to prioritize immediate threats to life and property, according to Gann. The firefighters treated the High Park Fire as a bunch of little fires and were selective about their efforts.

“There were hundreds, if not thousands, of places the fire was burning where prior to the High Park fire we would have been all over it, we would have gone and fought this huge fire,” Gann said. “In the context of the High Park Fire, they were nothing. We would just say ‘Is that fire threatening something?’ If the answer is ‘Not in the next 10 minutes,’ we go on.”

The community’s reaction to the fire has been supportive and helpful. When neighbors are not working on their own projects, they sometimes help Boscan with his.

Boscan estimates that a semblance of normalcy will return in three to five years when his house is rebuilt, but for now he can only work towards that goal.