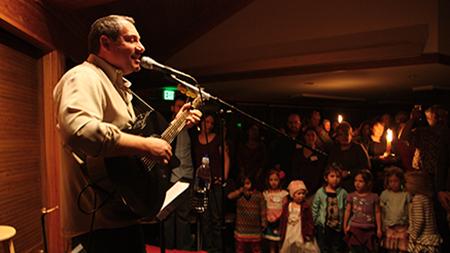 This past Saturday, Rabbi Joe Black was welcomed from Denver by the Congregation Harshalom to preach and lead everone in cermonial song. He has been a rabbi in Denver for three years, and has been passionate about music since he was a child.

People crowded into chairs from corner to corner to see Rabbi Joe Black, the Senior Rabbi of Temple Emmanuel, Denver’s largest synagogue. Even the parking lot seemed to reach capacity.

The lights were dimmed, candles were lit, oranges dashed with spices were passed around as a hymn was sung by the crowd during a traditional ceremony.

But children’s songs were sung as well –– tracks about Hebrew school were chanted and an Elvis inspired tune was crooned.

The concert wasn’t just intended for the congregation. It was designed as a community event. This was something new that Congregation Har Shalom hadn’t done in some time.

“It’s been several years since we did a community-wide event like this,” said Pamela Sachs, the event coordinator.

Sachs has stepped up as the new event coordinator of Congregation Har Shalom and hopes to reach out to the Fort Collins community at large more in the future like what was done Saturday Night.

“I’m hoping to put together something in the summer or spring that’s similar,” Sachs said.

“Part of our culture also teaches us to create community and invite guests in, and so that’s what we’re doing tonight is we’re trying to create a communal feeling in not just the Jewish community, but in all of Fort Collins,” Newman said.

According to Sachs, many members of the community attended who weren’t of the Jewish faith. The concert and the songs weren’t just religious or traditional.

Rabbi Black had toured in the past playing music. He gave it up once he got a large responsibility at his Denver Synagogue. He admitted to missing some aspects of playing live music like at the event.

“This is very fun for me I don’t get to do this very often. I do this three or four times a year,” Black said.

“I cut my teeth in Chicago, so I have blues, rock –– huge Hendrix fan, but also everything from James Taylor to Steve Goodman, all kinds of different influences,” Black said.

People of all kinds attended the concert, clapping or singing along with songs. Children, couples, and families were predominant, but all kinds of folks were seen in Congregation Har Shalom Saturday night.