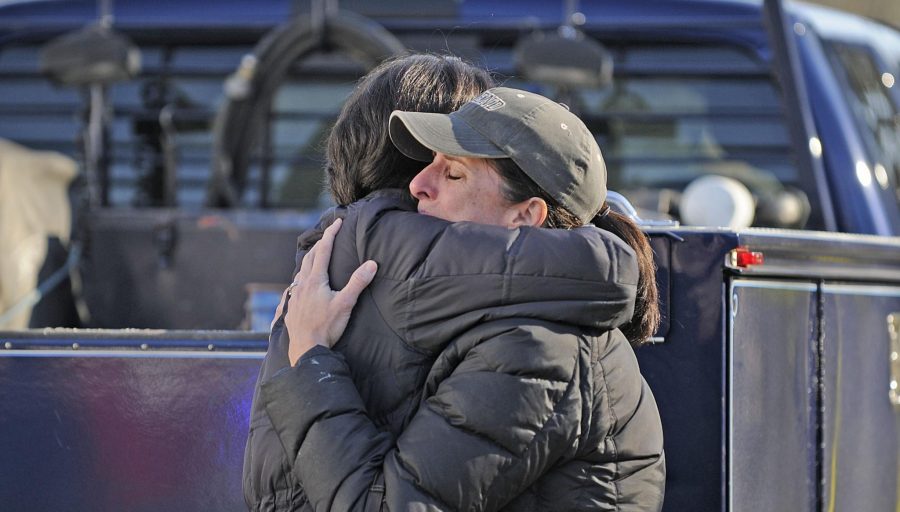 Authorities have released the names of the 20 children and six adults killed in the shooting at Sandy Hook Elementary School in Newtown, Conn.

All six adults killed at the school were women. Of the 20 children shot to death, eight were boys and 12 were girls.

According to the Associated Press, a vigil was held Friday night in Newtown at St. Rose of Lima Church for the 28 dead – 20 children and six adults at the school, the gunman’s mother at home and the gunman, who committed suicide.

The gunman has been identified as 20-year-old Adam Lanza.

Lanza shot his mother, Nancy Lanza, drove to the school in her car with at least three of her guns, and opened fire in two classrooms around 9:30 a.m. EST Friday, authorities said.

According to the Associated Press, when asked if Lanza had left any emails or other writings that might explain the rampage, state police Lt. Paul Vance said investigators had found “very good evidence.”

Among the victims was the school’s principal, Dawn Hochsprung.

“It has to stop, these senseless deaths,” said Frank DeAngelis, principal of Columbine High School.

According to the New York Times, 20 of the 26 people killed in the shooting earlier today were children. We have adjusted our headline to reflect these updated numbers.

In addition, another body related to the case was found dead at another scene in Connecticut, the NY Times reports. The gunman was found dead inside the school.

Here are President Barack Obama’s remarks about the shooting:

CSU President Tony Frank sent this email about the shooting:

Many of us are watching the unfolding news of the Connecticut school
shooting with deep horror and sadness.  Please remember that we have
counseling services available through the CSU Health Network (970-
491-6053) to support students who are struggling with the tragedy,
and our Employee Assistance Program
(http://www.ombudsandeap.colostate.edu/eap.aspx) is available to
provide support for faculty and staff.

Please also join me in sending our thoughts and prayers to the
families, parents and children in Newtown, some of whom are facing
unimaginable losses.

Stay safe this weekend, and hug your children close.

BY THE MCCLATCHY TRIBUNE

NEWTOWN, Conn. — Twenty-seven people, including 18 children, have been killed in a shooting at Sandy Hook Elementary School, according to news reports. The report cites an official with knowledge of the situation.

Sources told The Hartford Courant that many of the shootings took place in a kindergarten classroom, sources said.

One entire classroom is unaccounted for, sources said.

A person believed to be a shooter is dead. Earlier reports of a second shooter are unconfirmed.

Three people were brought to Danbury Hospital, but their condition is unknown. The emergency room is on lockdown.

Police were still searching the school at 11 a.m., and police dogs had been brought in. Around noon, the triage area was broken down, stretchers were taken away and the SWAT team left the building.

Soon after 9:40 a.m., police reported that a shooter was in the main office of the school. A person in one room had “numerous gunshot wounds,” police said.

Groups of students — some crying, some holding hands — were being escorted away from the school by their teachers. Some students were still in the school at 10:30 a.m., parents said.

School and local emergency officials are accounting for the children, who will be released to their parents to get them home. A staging area has been set up at the Sandy Hook fire department, directly in front of the school.

Frustrated parents are trying to get information from officials, who were still actively searching the school.

“I saw policemen — lots of policemen in the hallway with guns,” she said. “The police took us out of the school. We were told to hold each others’ hands and to close our eyes. We opened our eyes when we were outside.”

Her brother, 17-year-old Mergim Bajraliu, a senior at Newtown High School, was at his nearby home when he heard shots, he said. He first went to a neighbor’s house.

“Then we heard sirens,” he said.

He rushed to the school on foot and saw a girl being carried out, he said. She looked badly injured. Another girl had blood on her face, he said.

Mergim soon found his sister and took her away from the scene.

Parent Richard Wilford said his Sandy Hook second-grader, Richie, heard what he described as “pans falling” when gunshots rang out. He said that his son told him that the teacher went to go check, came back in and locked the door and told the students to stand in the corner.

“What does a parent think about coming to a school where there’s a shooting” It’s the most terrifying moment of a parent’s life … you have no idea,” said Wilford.

Eight-year-old Alexis Wasik, a third-grader at the school, said police were checking everybody inside the school before they were escorted to the firehouse.

“We had to walk with a partner,” she said.

One child leaving the school said that there was shattered glass everywhere. A police officer ran into the classroom and told them to run outside and keep going until the reach the firehouse.

Audra Barth, who was walking away from the school with her first-grade son and third-grade daughter, says a teacher took first-graders into the restroom after bullets came through the window.

Andrew Doba, a spokesman for Gov. Dannel P. Malloy, said the governor is monitoring the situation and is in “constant contact” with state police, who are coordinating with federal and local officials.

Malloy, who has spoken via telephone with President Obama, is now on the scene.

Afternoon buses and kindergarten has been cancelled. The entire district is on lockdown.