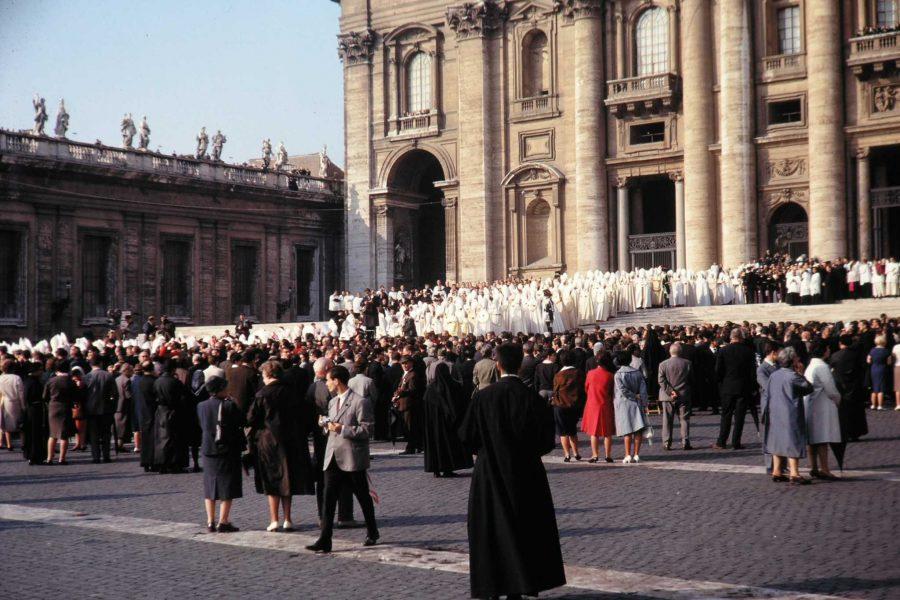 One CSU student and approximately 300 community members filled the the Lory Student Center theatre last night to hear best selling author, Washington Post contributor and senior fellow at the Brookings Institute, E.J. Dionne, talk about the relationship between politics and religion on the fiftieth anniversary of the Second Vatican Council.

Presented by the Theologian-in-Residence Program, the lecture was the fifth of sixth in a three-month speaker series: “The Second Vatican Council 50 Years later.”

Called “the most important religious event of the 20th century” by John O’Malley,  a Jesuit priest and University of Georgetown professor, the Second Vatican Council was a three year council held in Rome in 1962 by the Catholic Church that would set a course for the church in modern times.

“It put everything on the table for the Roman Catholic Church,” said CSU History Professor and President of TIR Jared Orsi. “Liturgy, theology, relationships to other Christian denominations and relations to other non-Christian faiths.”

The council produced a set of documents which revolutionized the Catholic Church and had effects that extended to the rest of the world. One of the more notable impacts was that it created open dialogue between different religions. It also created more freedom, openness and tolerance within the Catholic Church.

“There were statements on religion, religious liberty and self-determination, ending any sense you could be Catholic and anti-semite,” Dionne said.

He added that for a long time Catholics had held the Jews responsible for the death of Christ.

As a journalist, Dionne was able to cover the monumental visit of Pope John Paul II to a Roman synagogue in 1986, where he prayed and spoke about the need of religious tolerance.

In the fractured social and political climate we live in, the ideals of open dialogue and acceptance that came out of the Second Vatican Council are something we need to be aware of, Dionne said. He spent the evening talking about the need of unity and harmony in a divided world and singled out the culture wars as a something we’d be better off with if “we challenged the culture war myth.”

“I want to argue the politics of the culture wars is incompatible to both words and spirit of the Second Vatican Council,” Dionne said.

He used an example of president Obama and conservative Republican Rick Santorum as two people having seemingly incompatible worldviews agreeing on the importance of families to the economy and society.

Dionne also spoke at length on the history of communitarianism in the United States as one of the defining characteristics of our democracy and the need to retain that philosophy in modern times.

Joel Sholtes, a graduate student in the civil engineering department, came to the lecture with his wife, Kari, after seeing it advertised at school and hearing about it on NPR. They both came away from the lecture impressed with the seemingly liberal thoughts of a devout Catholic.

“I do appreciate having a political-minded theologian on campus,” Kari Sholtes said.
“That flipped my head, you think older, rich and white as being very conservative.”

Paul Hartigan drove from Erie to attend the lecture. He said he’s already attended other lectures related to the series and was especially looking forward to hearing Dionne talk.

“What he had to say was really very timely because of the elections,” Hartigan said.