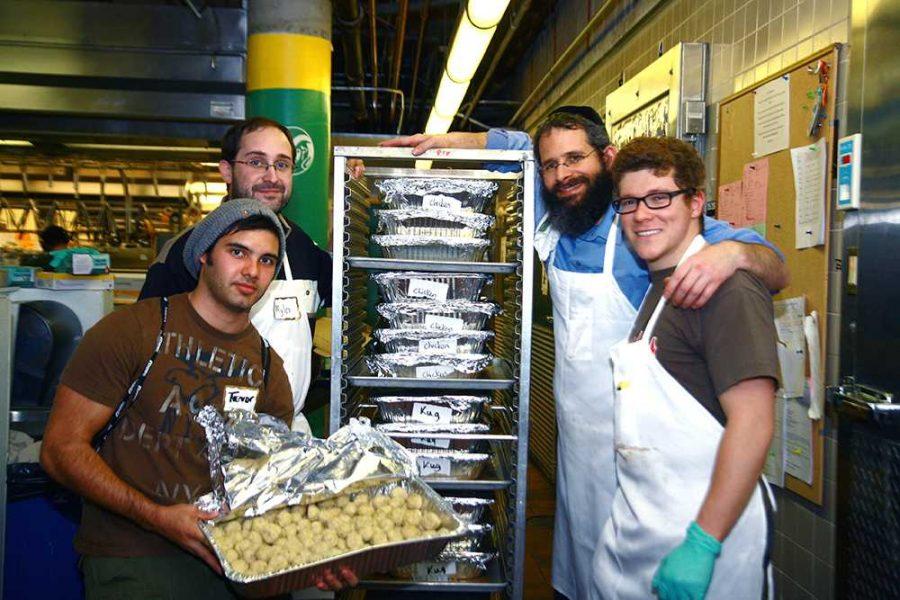 College students love free food, but along with eating traditional dishes, attendees of Shabbat 200 will learn about Jewish culture.The dinner, hosted by the Chabad Student Jewish Center, will be held Friday at 7 p.m. in the Lory Student Center West Ballroom.Student volunteers gathered Wednesday in an aluminum-foil covered section of the LSC kitchen to prepare traditional food for the more than 200 people expected at the dinner.

Preparation for the kosher meal began at 9 a.m., according to Marishel Diaz, a sophomore education major and board member of the Chabad jewish student organization.

Shabbat 200 is a larger version of the traditional dinners held every Friday in the Jewish community. They typically include 20 to 30 people, but this dinner invites anyone to participate and learn about Jewish culture, Diaz said.

The event has become a legacy, and is popular, according to to Rabbi Yerachmiel Gorelik, the Chabad faculty advisor. The Chabad Jewish Student Organization at the State University of New York, Binghamton began Shabbat community events in 1994, and it is now a national program. CSU’s Chabad began hosting Shabbat 200 six years ago.

The event has a relaxed atmosphere, according to Michael Lichtbach, a chemistry and biomedical engineering major and president of Chabad. Students can expect a “rocking great time,” with jokes, sometimes singing and dancing and plenty of food. Every aspect of the dinner is explained so students unfamiliar with the traditions will not be confused.

“It is a marathon of eating,” Lichtbach said. “It’s a five course meal, so pace yourself.”

Motivational speaker and basketball’s “Jewish Jordan,” Tamir Goodman will speak at the event, and Congressman Jared Polis will attend as the guest of honor, according to Gorelik.

“We bring speakers that really speak to Jewish pride, speakers that have achieved excellence in their particular field – whether it’s academic or athletic – despite the fact that they are a minority and Jewish,” Gorelik said. “It sends a message that, not only does this hold you up, but it can actually get you ahead.”

Chabad wants to help CSU achieve its goal of being a diverse university through increasing education about the Jewish culture, but it also provides a community and resources for Jewish students.

Diaz’s involvement in Chabad has helped her find community at CSU.

“I’m from Mexico, and this has been my home away from home,” Diaz said.

The university’s sponsorship of events like Shabbat 200 shows Jewish students that they are a part of the CSU community even if they are different, according to Gorelik.

“All my years here, I’ve heard how its a struggle for the Jewish student,” Gorelik said. “Sometimes they’re the only kid on the dorm and its tough being the only one, and so we’re trying to create an atmosphere that allows the student to feel a) they’re not alone and b) the university recognizes them.”

Senior Reporter Kate Winkle can be reached at news@collegian.com.