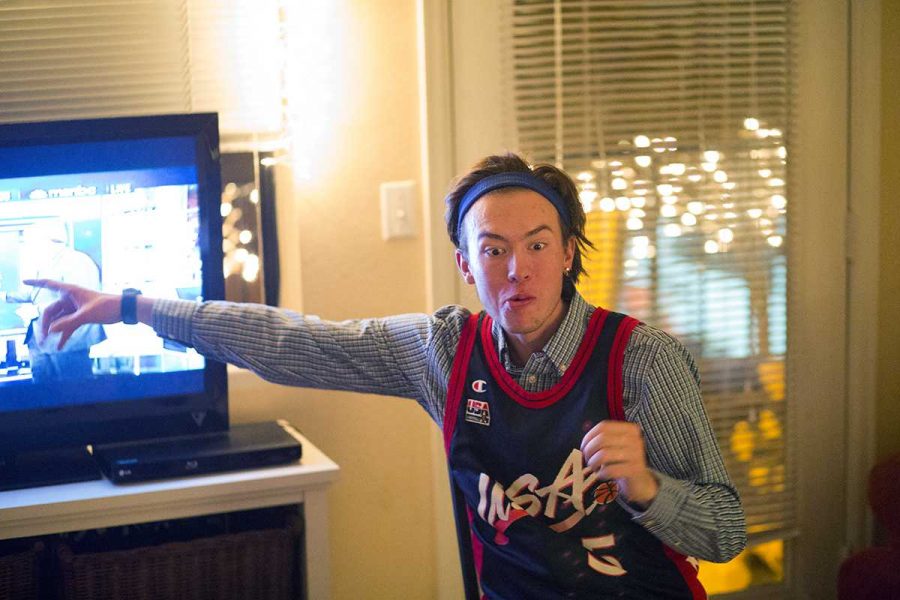 Zack Minner points at the TV enthusiastically as more news is given about the election with his friends as the election starts to get heated on Tuesday evening.

There was an air of indecisiveness, hyperactive joy and utter disappointment all muddled into one surprisingly representative sample of a battleground state in Parmalee Hall Tuesday night as President Obama claimed a second term victory.The watch party was put on by Gaining Understanding Through Involvement, Diversity and Education (GUIDE) as a way to give students a respectful environment in which to watch the elections, according to Elise Byron, a senior family and consumer sciences major, who was in charge of the event.GUIDE also hosted a watch party in Braiden Hall.

“This election is a really pivotal one just because both of the candidates are so opposite and it’s something that has created a lot of tension,” Byron said. “This was just a way for us to provide an inclusive community for students to celebrate the election and celebrate their right to vote.”

As the race drew to a close early on in the night, many students seemed confused that something that had dragged on for so long could be over so quickly. One student exclaimed, “It’s over already? That was anticlimactic.”

Olga Gladkova, a sophomore RA in the Braiden Global Village who was born in Russia but has since become a US citizen, screamed in excitement at hearing the news.

“In Russia, it’s looked down on for women to pursue high-paying jobs, like being a lawyer, which is what I want to do,” Gladkova said. “It’s important to me that Obama really supports a woman’s right to education and equality and minority rights in general. He understands what its like to work hard and really climb to the top.”

Some students were indifferent to the results.

“To me Mitt Romney was just a rich guy who didn’t understand anything,” said Grant Voyen, an undeclared sophomore attendee. “I didn’t like either candidate. I knew who would win, but I’m still kind of disappointed about it.”

“My faith in America has been restored,” said Liz Arellano, a junior Liberal Arts major. “I literally cried about 10 different times today out of anxiety over it … He knows how to rise above difficult situations and he really knows what moving forward really means.”

An Obama supporter had only one word to describe the experience.

“Right now I can only think of the word ‘ebulliency’,” said Kenny Young, a senior biochemistry major, “It’s pure happiness.”

Collegian Writers Carrie Mobley and Sean Meeds can be reached at news@collegian.com.