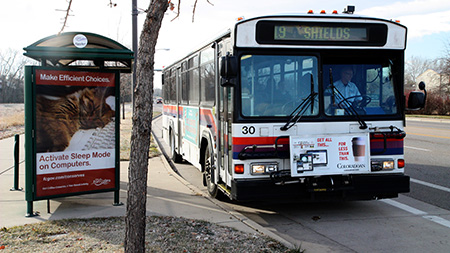 Tuesday morning, a bus driver waits for the massive group students who just boarded to take their seats. In the morning and afternoon bus stops like this one lare packed with CSU students traveling to and from campus.

The Transfort bus system, which runs seven routes to and from the CSU campus, has seen congestion in ridership for Route 11 this fall, despite the 2.6 percent decrease in ridership from last year.

According to Transfort General Manager Kurt Ravenschlag, there were 126 riders per hour in 2011. This year, the number decreased to 122 per hour.

Burianek went on to say that decreased ridership is a difficult issue to combat. In an attempt to eliminate the congestion, Transfort has incorporated the use of more than one bus — or trailer buses — to run for each stop and pick up additional capacity, according to Burianek.

While the use of the trailer-bus is helpful, a variety of factors can add or subtract ridership, including student’s schedules changing per semester.

“Peak period fluctuates every semester, but trailers start at the 7:30 loop and the 11:30 loop,” Burianek said.

Another factor that can lead to a congestion in ridership and crowding on the bus is the weather. With colder weather on the way the ridership is not only increasing, the baggage is as well.

“In the winter time people are wearing bigger jackets and capacity could go down based on what people are carrying,” Burianek said.

Burianek further explained that while capacity differs from bus to bus, the average number is around 65 riders.

In order to try and keep the riders from being left or being crowded on the bus, Transfort is working with the Associated Students of Colorado State University (ASCSU) to gain more funding. If there were more money to work with, there could be an additional bus and an additional driver for Route 11, according to Burianek.

“We considered having a bus run every 10 minutes, rather than every 20. That way it would spread out the riders more,” explained Burianek.

Ravenschlag explained that the hope was to increase the frequency, however there needs to be more funds to do so.

Currently, the allotted amount of money for the 2012-2013 school year is, $540,585.82. According to the overview of the ASCSU budget, the allotment for Transfort is 30 percent of the entire funding provided by ASCSU, which is the highest percentage of the total funds provided.

“The funding is a set amount agreed upon with ASCSU and the city,” said Burianek.

Ravenschlag explained that they are doing everything they can to try and come to a conclusion that benefits all of the parties involved, but they are running into obstacles along the way.

“We submitted a request to the city council for the partial funding to increase that funding and unfortunately that didn’t ride above the line,” Ravenschlag said.

Students are sharing a combined feeling of distaste for the crowding on the bus rides to and from the school.

According to sophomore social work major, Rachel Inman, this is definitely a problem that needs fixing.

“Every time that I am on the bus, I feel as though I am invading another person’s space, or having my own invaded. It’s uncomfortable to feel as though we don’t have any space,” Inman said.

Inman went on to say that she hopes that there will be a resolution to the problem sooner rather than later.

Burianek concluded that while this is an obvious issue, there are only so many things that can be done at this time with the limited means, but that they are working to resolve the issue.

“It’s known and we are trying to do everything we can with limited funding,” Burianek said.