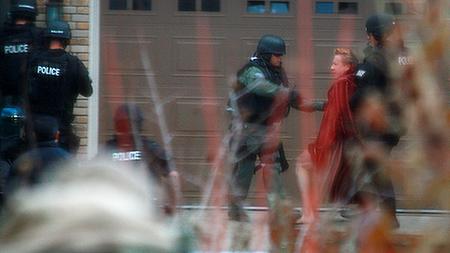 Steve Leslie was watching the Bronco’s game in his home Sunday when police, SWAT, firefighters and a K-9 unit swarmed his neighbor’s home across the street in Woodland Park –– a subdivision about 15 minutes southeast of CSU.

Authorities were responding to reports of the smell of natural gas coming from the home of Leslie’s neighbor, who was also reportedly displaying suicidal behavior, said Matt Johnson, a Fort Collins Police Services spokesman.

The first call came in at 11:09 a.m. and officers responded within minutes. It would be more than five hours before the standoff ended with the man in an ambulance.

“None of us knew him… (he was) pretty secluded,” Leslie said.

The man had shut himself inside his home at the 3200 block of Yellowstone Circle and filled it with natural gas, police said.

Emergency personnel barricaded and cut off power and gas to part of the neighborhood, and prompted neighbors like Sean Roberts to evacuate their homes. Roberts said that a sniper and spotter were taking position in his backyard when they urged him and his family to evacuate around noon.

Meanwhile, police were trying to establish communication with the man via megaphone. They eventually shot volleys of tear gas canisters into the home, broke into the basement and smashed through the front door with a battering ram.

According to Johnson, the individual ended up voluntarily exiting his home at around 4:25 p.m. Police may release the man’s name after further investigation.

Upon exploring the building, officers discovered that the man had filled it with gas using his car and stove, according to police radio traffic.

Radio traffic also revealed that the home may be inhospitable for some time due to the amount of gas in the building.

That is not the case with neighboring homes, Johnson said. The area is safe for families and most have returned.

A neighbor, who insisted on anonymity, said that the man, his wife and young son are “really nice.” But the neighbor added that they rarely see the three of them.

Fort Collins resident Ally Wertz was visiting her mother who lives on Yellowstone Circle. Before the incident started, Wertz, her husband and their son left the area. While they were gone, emergency personnel set up barricades, leaving the family unable to return to their car.

Wertz grew up on Yellowstone Circle, describing it is a nice neighborhood that is mostly home to families.

“This doesn’t happen around here,” she said. “Especially on this side of town.”