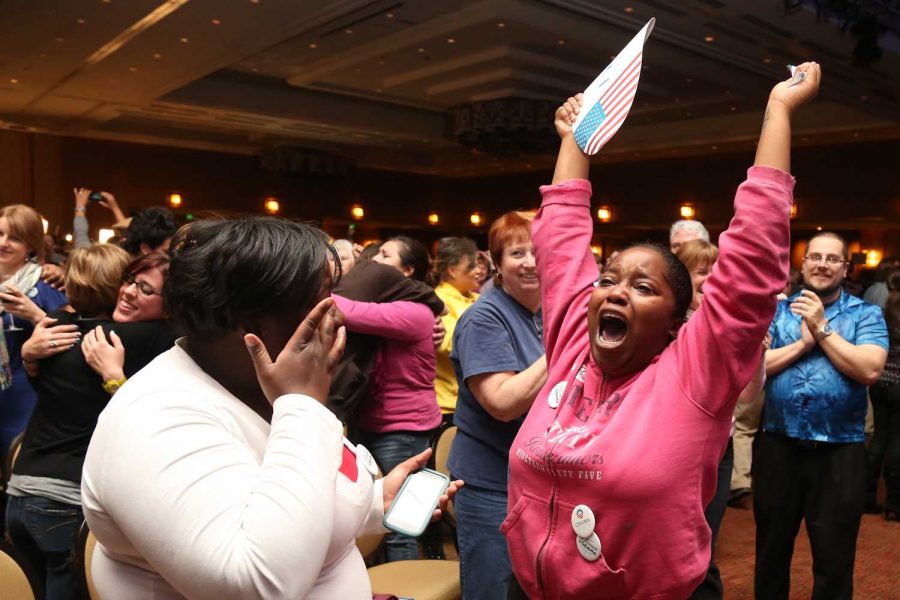 Asia Taylor, right, and her sister Ashlee celebrate the election of Barack Obama as President of the United States at the Colorado Democratic watch party in the Sheridan Hotel in Downtown Denver, Colo. Tuesday night.

When the announcement came, Stephanie Daley-Watson leapt into the air, gleefully cheering for President Obama’s election to a second term. The crowd of approximately 1,000 people gathered for a Colorado Democrats watch party in the Sheraton Downtown Denver Hotel cheered and threw their hands into the air, chanting, “Four more years!”“Tonight, you voted for action, not politics as usual,” Obama said Tuesday night during his victory speech in Chicago. “You elected us to focus on your jobs, not ours. And in the coming weeks and months, I am looking forward to reaching out and working with leaders of both parties.”

Daley-Watson left her family and job in Seattle five days ago to campaign for President Obama in Colorado, where she attended law school. Washington is a solidly Democratic state, and she said she believes it did not make sense to stay there.

“It’s very rewarding to actually spend time doing something that you feel like you’re really giving back,” Daley-Watson said. “This is a very important presidential race for women’s issues, the middle class, the environment, the list is very long … I couldn’t bear to think of an alternate outcome.”

At Sports Authority Stadium at Mile High Tuesday night Republicans gathered anticipating an opposite end to the night. The watch party began as a cheerful and hopeful evening with attendees dressed in white, blue and mostly red. As the viewing party came to a close and the election was decided, silence cut with a few boo’s could be heard as republicans started for the exits.

“With this choice our nation will suffer immensely and we’re going to become a socialist nation and that’s just scary,” said Sonia Marschner, a volunteer for the Romney Campaign.

In his concession speech, Mitt Romney thanked volunteers, fundraisers, donors and surrogates  for their efforts in the campaign. He encouraged politicians nationally and at the state level to “put the people before the politics.”

“I believe in America. I believe in the people of America,” Romney said. “And I ran for office because I’m concerned about America. This election is over, but our principles endure. I believe that the principles upon which this nation was founded are the only sure guide to a resurgent economy and to renewed greatness.”

Energy remained high throughout the night as the music blasting from speakers near the front of the ballroom quieted periodically and eyes turned to two large screens broadcasting CNN’s election projections. The crowd responded to every projected Democratic win with cheers that only increased in volume and frequency throughout the night. Rick Palacio, chair of the Colorado Democratic Party, took the stage shortly after the announcement of Obama’s win.

“I thought we’d be on edges of our seats a while longer,” he joked.

Although Colorado eventually supported Obama by a close margin, it does not mean that Colorado is now a heavily Democratic state, according to political science professor John Straayer.

“Colorado has been migrating in the blue direction, and tonight was another step in that direction,” Straayer said.

Barnes recently moved from New York, a solidly Democratic state, and said he was excited to vote in Colorado because he feels his vote will have a greater impact.

“Coming out to a community like this gives a human aspect to the campaign. You normally see people spitting out bull quotes, politics seems to be very highly processed,” Barnes said. “Coming here and seeing people who actually engage in the same issues and think about things in similar ways and fight for them actively, its just a wonderful environment. There’s a real sense of collegiality at the end of a campaign.”

Obama’s reelection shows his leadership, according to Stephanie Sandhu, a medical student at the University of Colorado who plans to study for a test she has on Friday after leaving the event. She said Obama’s win has great significance for the healthcare industry, and that because the Affordable Care Act will be upheld, students and those with disabilities will receive the care they deserve.

The tense moments of the night was the uncertainty of the swing states leanings. Matt Derrington, a CU student, breathed a sigh of relief once Ohio and its 18 electoral votes swung Democratic. He, like many other attendees of the watch party, plans to keep partying and drinking throughout the night.

The race in Colorado was close leading up to the election, and it was not a foregone conclusion beforehand who would win Colorado, according to Straayer. Although not surprised by the final results, Straayer attributes the Democratic Party’s apparent nationwide victory to a changing demographic and changing attitudes throughout the nation.

The Republican party has steadily migrated in a conservative direction over the years. Tuesday’s election may have been an indication that the Republicans need to move in a more moderate direction concerning issues such as gay marriage, immigration and women’s reproductive rights, according to Straayer.

“You’ve got to have the two parties work together, parties that will sit down and work out differences,” Straayer said. “And, if you have one party that gets so rigid it won’t do it and in the face of losses simply becomes even more rigid, that’s neither good for the party nor the country.”

Romney expressed a similar sentiment, and advocates working together in Washington to continue to grow America.

“The nation, as you know, is at a critical point,” Romney said. “At a time like this, we can’t risk partisan bickering and political posturing. Our leaders have to reach across the aisle to do the people’s work.”

Though he touched on the partisan political landscape during his victory speech, Obama was nevertheless optimistic.

“I have never been more hopeful about America,” Obama said.