The other options in the election 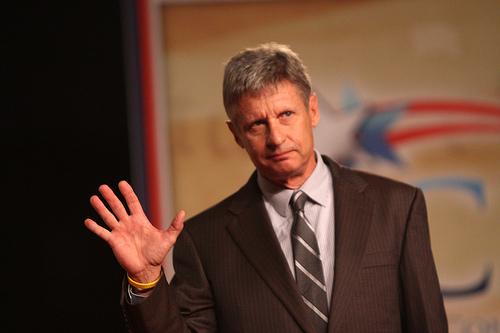 Voters may find that they agree with a third party candidate, like Johnson or Jill Stein of the Green Party, more than the conventional candidates, according to Scott Phillips, president of Young Americans for Liberty at CSU. Third party candidates provide an alternative to America’s left vs. right tradition.

“When we subject ourselves to the illusion of only two candidates for presidents, the choices become polarized,” Phillips wrote in an email to the Collegian. “Our choices become black and white.  But when we introduce third party candidates, we get the gray area and with that comes many different shades.”

There are 14 parties besides Democrat and Republican listed on the November ballot.

During the 2000 election, the Commission on Presidential Debates required a candidate to have a 15 percent support level across five national polls to be included in the debate. No third-party presidential candidate fulfills the criterion for the 2012 election, according to Kyle Saunders, a CSU professor of political science.

Johnson has filed suits in Washington D.C. and California to try to change the debate system, and Stein and her running mate were arrested as they attempted to enter the grounds of the second presidential debate Oct. 16. These candidates as well as Virgil Goode of the Constitution Party and Rocky Anderson of the Justice Party will participate in their own debate Oct. 23 moderated by Larry King.

Votes for third party candidates are often “protest votes” against the two-party system, but are often “wasted” because they do not have a chance of actually voting a candidate into the presidency, according to Saunders.

“I think a wasted vote is voting for somebody you don’t believe in,” Johnson said. “…Voting for the person you believe in — that’s how you change things in this country.”

Voting for third party candidates gets the attention of Republicans and Democrats who respond because they want those votes in the following election, according to Manski.

“If you vote for either of the established candidates, your vote disappears — no one will see that as a statement about anything, other than that you don’t like the other guy,” Manski said. “But if you vote for the Green Party your vote will count, you will be seen.”

In the future, Manski hopes that the system changes and that third party candidates have a viable run for office.

“American elections are hardly democratic, and we have a lot of work to do here at home,” Manski said. “…Social change is never easy. It has been very costly throughout human history to achieve, and the way in which we change the political system of bringing democracy to the U.S. is fighting for it.”

Gary Johnson
Johnson was New Mexico’s governor from 1995-2003. During his term, he vetoed 750 bills and balanced the state’s budget. Johnson has a business background and formed the non-profit OUR America Initiative in 2009 to promote civil liberties, rational public policy, and fiscal responsibility.
FUN FACT: Johnson climbed Mt. Everest and completed the Hawaii Ironman multiple times.

Balance the budget in 2013, give responsibilities to the private sector
Reform entitlement programs and limit the government’s role in the economy
Cut taxes, and tax expenditures instead of income

Local control of education; parents decide where their children attend
End the Department of education

Engage in foreign policy programs that protect U.S. interests
Use military action as a last-resort and bring troops home

Make it easier to get a temporary work visa
Enforce a ‘one strike, you’re out’ rule for immigrants who do not follow the work visa process

Energy and the Environment

Government should not promote or manage energy development

BIO
Dr. Jill Stein is an environmental-health advocate, and created a “Healthy People, Healthy Planet” teaching program to discuss the relationships of human health , climate security, and green economic revitalization. She co-founded the Massachusetts Coalition for Healthy Communities in 2003, and was elected to town meeting in Lexington, Mass.

Provide grants and loans to green businesses and cooperatives

Energy and the Environment