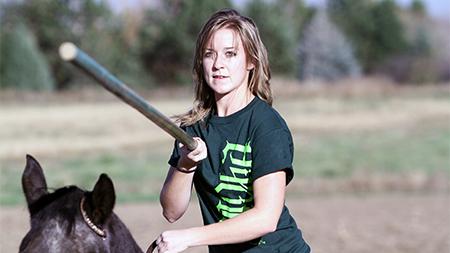 President ofthe new Jousting Club Kryssi Miller practices at her arena Monday afternoon. The Jousting Club performs on horseback, but also does other games on foot like sword fighting and spear throwing.

Imagine suiting up in a motorcycle jacket, Mixed Martial Arts gloves and traditional knight’s helmets made from 14 to 16 gage steel. You are riding a stampeding horse while aiming a 15-foot wooden pole at your opponent.

Welcome to the sport of jousting.

The Jousting Club at CSU is eager to recruit new members for the 2013 spring semester. Informational meetings and practices take place every Wednesday at 4 p.m. in Johnstown, which is about 35 minutes south of Fort Collins.

Currently the jousting club has three active members who have been training for a little over a year. Patrick Lambke, a world champion jouster and head of the Knights Jousting Academy, has agreed to coach those that are eager to learn the sport.

“We want safe and open-minded members to enjoy this sweet sport,” said Kryssi Miller, a senior theatre major and president of the jousting club.

Anyone that is willing to learn is welcome to attend practices. There are no size or age requirements, and the team is co-ed.

“In this sport, men and women are equal,” Miller said, “This is an exciting chance for girls that wanted to be a knight.”

Members of the club will compete in tournaments on Saturdays beginning in the spring semester.

“It is very competitive, but we cheer for each other and act like a team,” said Anna Adrian, a master’s candidate and active member in the club.

Eventually, the club would like to compete against neighboring colleges –– if that’s an option.

“I don’t know of any other university that has jousting,” Miller said.

“It is a type of shield tag,” Miller said. “It’s really all about the accuracy of hitting your opponent.”

The point system differs between the two types of jousting. In light armor jousting, the jouster is trying to hit a bull’s-eye located on their opponent’s shield. If they are successful in hitting the bull’s-eye with their lance, they get points.

“You have to have complete trust in your opponent, because you aren’t trying to injure each other,” said Bryan Connly, a senior theatre major and vice president of the jousting club.

That doesn’t mean that injuries don’t occur. The most common injuries are small scrapes and bruises, as well as sore arms due to the heaviness of the lance.

“It’s safe if you are doing what you are told,” Connly said.

To prevent injuries, jousters wear motorcycle jackets, gloves, elbow and wrist pads, as well as traditional garb that original jousters wore. Every jouster is also required to wear a knight’s helmet during practice and competitions.

“We found the helmets at the antique store,” Adrian said.

New members will be provided with their own equipment and horse. The club is eager to gain some new members and introduce them to the sport of jousting.

“It is perfect for the pent-up aggression people built up during mid-terms,” Miller said.

City Beat Reporter Amanda Zetah can be reached at news@collegian.com.