What will happen to Hughes Stadium? 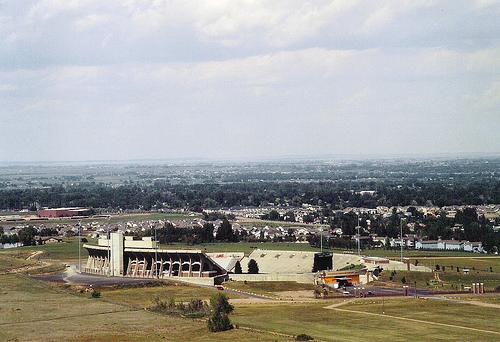 With president Tony Frank announcing today that  CSU plans to tentatively move forward with an on-campus stadium, the question arises about what will be done with 32,500-seat Hughes Stadium.

A feasibility report, released in early August and conducted by the Stadium Advisory Committee to look at the viability of building an on-campus stadium, had a separate study assessing Hughes Stadium. It concluded that 45-year-old Hughes Stadium has a backlog of $30 million in “deferred maintenance.”

In Frank’s email announcing his decision to campus and community, he stated that the new stadium will be contingent upon financing. If enough money for a new stadium isn’t generated in the next two years, the university would consider renovating Hughes.

“It is my belief that if we have not identified a viable financing plan for a new stadium to take forward within two years, we will have to suspend these efforts and make some investments in assuring that Hughes Stadium remains a viable venue for Colorado State football,” Frank wrote.

If the university decided not to move forward with an on-campus stadium and expand and renovate Hughes by adding an additional 17,000 seats, the cost would jump to somewhere between $90 and $105 million for the expansion alone plus $30 million for renovations.

The number was reached by taking a 1999 estimate for seat expansion and multiplying it by a factor of 1.7 to adjust for inflation, according to the feasibility report.

The report doesn’t directly address the options for Hughes should the on-campus stadium be built.

A Denver based commercial construction and demolition firm, who wished to remain anonymous for competitive reasons, estimated the cost of tearing down a 32,500 seat stadium would be less than $1 million. Most of the material from the stadium would be recycled.