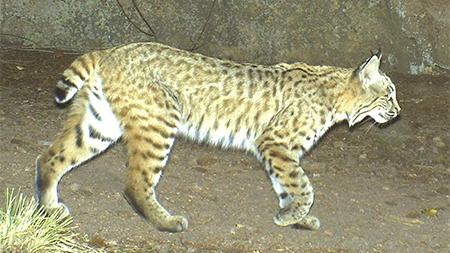 CSU’s College of Veterinary Medicine and Biomedical Sciences has conducted a study on three parasites contracted by Bobcats, Giardia, Toxoplasma and Cryptosporidium. The above photo was taken by a remote camera in the Colorado facility.

Parasites are plaguing pussycats of all stripes.

Bobcats are more likely to contract Giardia, Toxoplasma and cryptosporidium closer to urban areas, according to a five-year study co-authored by Sue VandeWoude, an associate dean in CSU’s College of Veterinary Medicine and Biomedical Sciences, and other researchers.

The study was performed in order tov examine how diseases are spread between North American wildcats, as well as outdoor domestic cats, according to VandeWoude.

Giardia and Cryptosporidium are contracted by drinking unfiltered water in the wilderness. Toxoplasma, however, is contracted from eating undercooked meat or by handling feces. Toxoplasma eggs, according to research scientist Valeria Scorza, must be in feces for a week to become a problem. One way to avoid this is to clean a cat’s litter box regularly and wash your hands afterward.

Blood and feces samples were collected by the research team. With funding from the National Science Foundation, the researchers examined the blood for antibodies to the parasites and looked at the feces for the parasites themselves. After this examination was done, post-doctoral fellow and researcher Scott Carver mapped out the location of infected bobcats in relation to proximity to urban areas.

“(Cryptosporidium and Giardia) were more prevalent in the fecal samples we had from bobcats when they were closer to urban centers,” VandeWoude said, “and the typing we were able to do on some of the Giardia samples suggested it came from people.”

Some strains of these parasites are unique only to cats, while other strains can be shared between animals and people. For example, with Toxoplasma, “cats are the definitive host,” according Scorza. This means that when this parasite is present in cats, the parasite’s eggs are shed through the cat’s feces. In other life forms, the eggs aren’t shed through defecation. Antibodies to this parasite can be formed in both animals and people.

Scorza speculates that the reason for the higher number of parasites closer to urban areas was that there was “building into animals’ environment.” Scorza said more research would have to be done to form a definite conclusion.

Each of these parasites can be contracted by domesticated animals as well. Lauren Rodgers, South Mesa Lab Technician, said Giardia was a common parasite found among in-house lab tests. Cryptosporidium and Toxoplasma, in her experience, are not present in the tests the hospital performs. Outdoor pets are at risk for Giardia.

“They have access to bodies of water that are stagnant,” Rodgers said.

Treatment for Giardia, according to Rodgers, begins with fecal testing. If the sample is positive for Giardia, the animal is treated for five to seven days with an intestinal antibiotic like Senbendazole or Flagyle.

To avoid these parasites, Rodgers and Scorza recommend a combination of keeping living spaces clean, washing hands after handling feces, and drinking only filtered water.

More information on Giardia, Toxoplasma and Cryptosporidium can be found on the CDC website.

Collegian Writer Devin O’Brien can be reached at news@collegian.com.