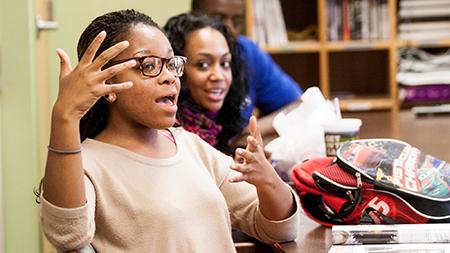 Makeda Hop-Crichlow discusses her standpoint on interracial dating at Real Talk in the Black/African American Cultural Center. The talk was a round-circle discussion on thoughts and viewpoints of interracial dating.

This week, Real Talk focused on getting to the heart of the matter of love.

Interracial dating was the subject of Tuesday’s Real Talk, a weekly meeting at the Black/African-American Cultural Center in the Lory Student Center where students gather to discuss issues affecting the black community.

About 10 students went to BAACC for the discussion.

The role of gender was a big discussion point. Some students felt it was easier for men to be in an interracial relationship than it was for women, due to established social roles, such as expected passive behavior in women.

Some of the students said that what they called hypocritical behavior in black men factored into this. There was a feeling that, while some black men date white women, they criticize their female counterparts for dating other races. This creates a stigma.

Alexandria Norris, a junior human development and family studies major, said she has experienced this feeling when in public with her boyfriend of a different race.

History’s influence on the current dating scene was also discussed. The group talked about how, due to older generations’ experience with segregation, this creates a mindset of dating within one’s own race. In some cases, this may be passed down to younger generations, but it isn’t always.

Undeclared freshman Yazmin Atmore said she wasn’t of that mindset and would be open to dating anyone, regardless of race.

“I feel like if that’s who God sent me, I’m going to take them,” Atmore said.

Families, the group decided, had a large influence in the choice of dating partners. Some of the people gathered said their parents sometimes expressed a preference for same-race dating and had strong disapproval for anything else. This is also an issue when meeting a significant other’s family, as Norris found out. When she met her boyfriend’s family, they began talking about Norris in Spanish, not knowing she spoke the language.

Parents, in particular, were pegged as having impact. Rasheedah Fletcher, a senior human development and family studies major, said that she looks for someone with qualities similar to those of her father, which other races can’t provide.

“It stems from what I saw growing up,” Fletcher said.

Collegian Writer Devin O’Brien can be reached at news@colostate.edu.