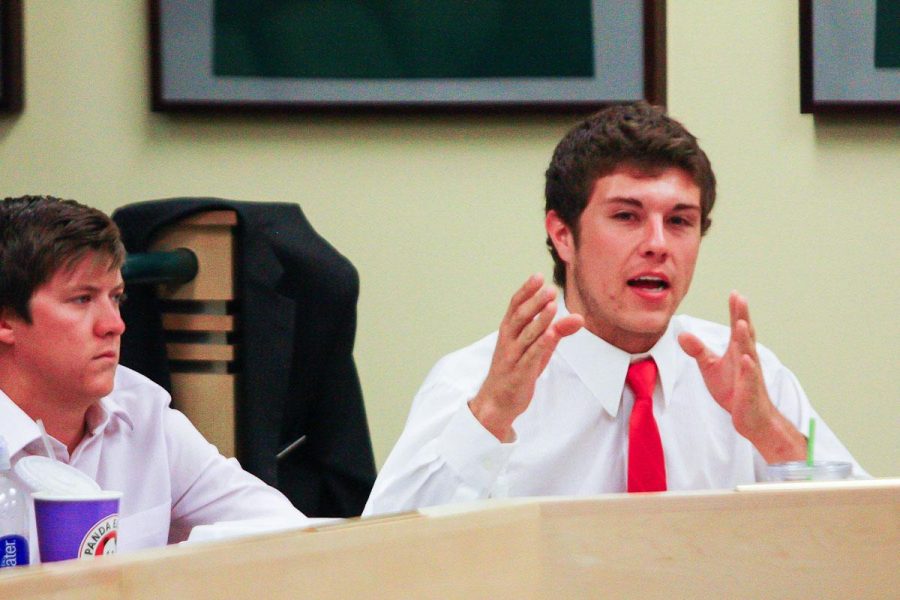 Robert Duran, Chief of Staff for ASCSU, speaks at the senate meeting Wednesday night in the Senate Chambers of the Lory Student Center. For the first time, Senate discussed the possiblity of banning tobacco on campus.

Fifty-three percent of students and 63 percent of faculty and staff reported that they were likely to support a smoke-free policy on campus, according to a student government and university survey on tobacco use presented to the Associated Students of CSU Senate Wednesday night.

Of the people who received the survey, 805 students and 1,986 faculty members responded.

ASCSU is soliciting opinion on the issue as a way to begin discussions on whether they should ultimately push to ban the substance from campus.

Under existing rules, smoking is not permitted in any on campus building, and smoking outside campus buildings must take place at least 20 feet away from doors or ventilation.

“This survey simply shows that the health network and ASCSU are taking this seriously,” said Audrey Purdue, director of health for ASCSU, who conducted and presented the survey to Senate. “We want to look into this more before we take action.”

About 63 percent of students and 75 percent of faculty said that it should be the responsibility of campus administration to enact policies that protect the campus community from secondhand smoke.

The results of the survey provoked many questions from the ASCSU Senate.

Campuses have embraced these measures in growing numbers, according to Purdue. More than 700 universities across the country are taking some sort of stance against smoking and tobacco. Washington State, Oklahoma State and Purdue University were examples, she said.

Cameron Doelling, an intra-university senator, asked about the type of action that would be spurred by the survey’s findings.

“We really need much more data in order to make a conclusion,” Purdue said. She added that she plans to hold several open forums in the spring 2013 to hear more student and faculty opinion before any position is formed.

Purdue said “we are nowhere close to making a decision” to push for a CSU campus that is completely smoke- or tobacco-free in the near future.