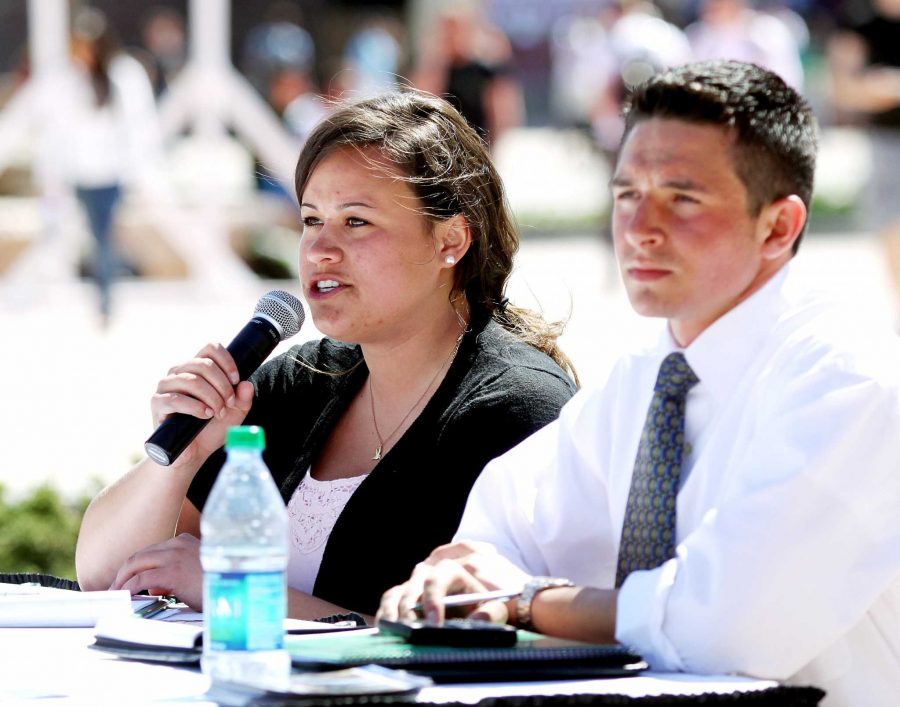 Candidates Regina Martel and Joe Eden answer a question at the ASCSU election debate on the Plaza Friday afternoon. Martel is currently the deputy chief of staff and Eden is a College of Liberal Arts Senator.

Approximately seven out of Regina Martel and Joe Eden’s 16 student government campaign promises have been completed halfway through the first semester of their administration, according to Martel, president of the Associated Students of CSU.

At this time last year, the 2011-2012 administration had completed 15 of its 44 promises. The 2010-2011 administration completed four of its six campaign promises throughout its entire term.

Three of Martel’s accomplishments –– blue books, a biannual report on his administration’s achievements and the Old Town Late Night Bus Route –– have been continuing policies created by the previous administration and working to make them more sustainable.

Blue Books, for example, were made free to all students during Eric Berlinberg’s 2011-2012 presidential administration. The problem with this, Martel said, is the amount that these books are costing ASCSU.

“People have been taking many more than we anticipated, which means it is getting very expensive,” Martel said. “We have been exploring other alternatives to keep them free to students, such as professors handing them out in class instead of having them at the bookstore.”

Two of Berlinberg’s other achievements are also student government initiatives that Martel is working to maintain.

“We are working with the Downtown Business Association, the City of Fort Collins and the Fort Collins Police Department on how to keep the bus route sustainable,” Martel said. “We are constantly asking ourselves, ‘Is this too expensive, or not expensive enough?’”

Aside from sustaining three initiatives that carried over from last year, Martel’s administration has also set up a student Stadium Advisory Committee to field the campus’ opinions of the on-campus stadium and report them to university officials.

Student government said it will continue to provide additional opportunities for students to voice concerns about CSU President Tony Frank’s decision to build the facility.

“We really want to make sure that all concerns are voiced,” Martel said. “We have a great relationship with Dr. Frank currently and as problems arise we will be sure to voice those concerns to him.”

The administration has also collected student opinion by holding a finance forum Oct. 1 on the Lory Student Center Plaza, designed to give ASCSU an idea of CSU’s thoughts on subjects like tuition and fees. Martel said ASCSU did not record how many students participated and hasn’t yet reflected on the forum’s findings, having focused instead on preparing for the most recent Homecoming Weekend.

Another finance forum will be held on Oct. 17.

“I think Joe and Regina are a little more conscious about how students look at things and how our role impacts them,” said Robert Harris, a senator from the College of Natural Science. “ … They have taken steps necessary to make sure student voice is being heard.”

Student government has also reformed the Student Fee Review Board –– a group of students that approves or denies fee increase proposals –– to have 50 percent of its staff belong to the ASCSU Senate.

The change is part of a larger push on behalf of Martel and Eden to encourage student senators to take their positions more seriously. On top of giving the ASCSU officials more responsibility, the administration has also strictly enforced senate attendance and start times, said Chelsey Green, a senator from the College of Natural Science.

“In the past, that’s been a problem of people just meandering in after talking on their phones or something,” she said.

Martel said she hopes to complete the remaining promises by the beginning of next semester.

“We know there are a lot of flaws in the student government right now … ” Green said.  “ … I feel as though they have made good grounds in improvement and I believe they are striving toward that goal of having a better functioning student government as a whole.”