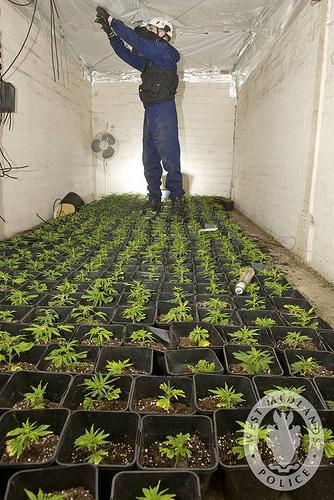 Colorado voters will decide on Nov. 6 on Amendment 64 –– legislation that would regulate marijuana like alcohol and it make the state among the first in the nation to profit from the substance’s legalization.

It proposes modifying Colorado’s Constitution to allow individuals 21 years old or older to possess, use, grow and transfer up to one ounce of marijuana or up to six marijuana plants, with certain restrictions.

Adults would be allowed to share up to one ounce of marijuana with other individuals over the age of 21, but are not allowed to sell it.

According to Vote No On 64, one ounce of marijuana is the equivalent of 60 joints –– others say it comes out to 40 joints.

“Marijuana prohibition has failed and 64 is a sensible, evidence based approach for Colorado,” said Betty Aldworth, a spokesperson for the Campaign to Regulate Marijuana Like Alcohol.

At a campaign event that took place in Fort Collins on Oct. 19, Libertarian presidential candidate Gary Johnson said that 90 percent of the problems with drugs in this country are problems because of prohibition, not use.

“I’m the only candidate running for president of the United States that wants to end the drug war now; legalize marijuana now,” Johnson said at a former medical marijuana dispensary. “Colorado has the opportunity to change drug policy worldwide.”

Changing drug policy worldwide is the same reason Rachel Drechsler, treasurer for the College Republicans at CSU, said she is opposed to the amendment.

“I believe that by regulating marijuana, the state of Colorado would become an epicenter for the drug trafficking across the nation,” Drechsler wrote in an email to the Collegian.

Dreschsler stated that she also worries about the impact marijuana legalization would have in Fort Collins and on the CSU campus.

“I believe that if Amendment 64 was made legal here it would directly impact the availability of marijuana across campus which would directly encourage a higher rate of use among students which would lead to a less academically inclined community,” Dreschsler wrote.

In September, Governor Hickenlooper opposed the amendment saying it would inhibit Colorado from remaining the healthiest state in the nation and it has the potential to tell children that drugs are OK.

“While we are sympathetic to the unfairness of burdening young people with felony records for often minor marijuana transgressions, we trust that state lawmakers and district attorneys will work to mitigate such inequities,” Hickenlooper said in his statement.

Dawn Nannini, evaluation specialist at Team Fort Collins, a local organization dedicated to preventing the abuse and illegal use of alcohol, tobacco and other drugs, also worries legalization of marijuana would negatively impact youth.

“We are opposed to passing Amendment 64 because we believe that legalization will increase its availability to use and we know that the availability of any substance is a risk factor for increased use among young people,” Nannini said.

Johnson disagreed, saying that the community would benefit from the legalization of pot because it would free up law enforcement to focus on other crimes.

“I think when we legalize marijuana and realize that the sky doesn’t fall, police actually go out tomorrow and enforce real crime as opposed to victimless non-violent crime,” Johnson said. “It starts with looking at drugs first as a health issue rather than a criminal justice issue.”

“I think our community will benefit in a deeper, unseen way for people who don’t smoke marijuana because there will be more resources for law enforcement and the underground trade would go away,” junior journalism major Daniel Allen said.

According to the 2012 State Ballot Information Booklet, the state legislature would enact a tax on marijuana sales and the first $40 million in revenue raised annually would fund public schools.

“When you regulate it, you’re getting the tax dollars and it can go to things like education,” said Caleb Elwell, a graduate mechanical engineering student. “Otherwise all that money’s going straight to criminals.”

Education funding has been cut drastically in the last few years as a result from the economic crisis and many supporters of Amendment 64 think the tax dollars from legalizing marijuana would be put to good use.

“I think it’s going to pass and when other states see the revenue generated by legalizing marijuana I don’t think other states will be able to resist (passing similar legislation), especially in a recession,” Fort Collins community member Riley Riplinger said.

CSU students remember how the budget cuts affected their education and agree that public schools would benefit from more funding revenue.

“Every (school) district in every state has felt the burdens of such drastic educational budget cuts,” sophomore wildlife biology major Ashley Munson-Brigham said. “Education should be a number one priority for the economy because the more educated citizens, the more the economy will flourish.”

Munson-Brigham said budget cuts made everything more difficult at her high school.

“We had to pay for required classes out of our own pockets. The money from Amendment 64 could fill the void of a lot of tax dollars,” Munson-Brigham said.

Shawn Coleman, a member of the Organization of Cannabis Professionals, put it differently.

“Our current marijuana policy is not consistent with the principles of liberty in which this country was founded,” Coleman said. “Amendment 64 is a solution.”