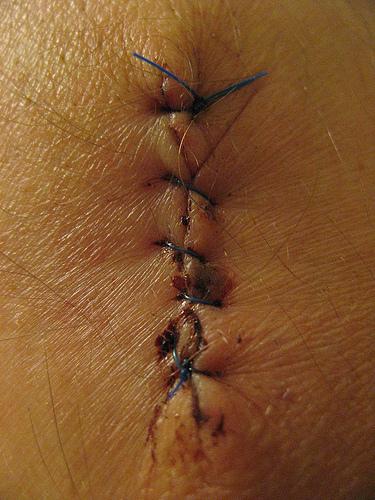 Steven Jacobs looked up for a split second and knew his RamRide car was going to hit the truck that was trying to take a left turn.

“Right away, the car filled up with smoke and dust from the airbags and my first thought was ‘Get out of the car,’” said the sophomore biological sciences major. “ … We all got out and at that point, our blood and our adrenaline was really going.”

The two vehicles collided Saturday at 11 p.m. at the intersection of Elizabeth Street and Constitution Avenue by Ram’s Village. Speed or alcohol were not involved, said Fort Collins Police Services Officer Kyle Bendsa — it was that the truck failed to yield and therefore caused the collision.

Jacobs initially thought none of the five people in the RamRide car, who were all wearing seatbelts at the time, were injured. But freshman business administration major Nick Bosen wasn’t so lucky.

“I look back at our roommate, Nick, and I could see a huge gash on his forehead and skin hanging off,” he said.

Bosen was in the middle of signing a mandatory RamRide waiver when their car –– a Chevy Impala –– crashed head-on into the Ford pickup, according to Jacobs.

An ambulance arrived on the scene in five minutes and took him to Poudre Valley Hospital, where he said he received 50 stitches from a plastic surgeon because of the severity of the injury. Bosen doesn’t yet know how much his care will cost, or if he’s going to ask the truck driver responsible for the accident to pay for it.

RamRide policy states that their vehicles cannot begin to move unless all passengers have signed mandatory waivers, which makes passengers agree to basic RamRide rules. They clarify to students that their ride could be terminated at any time and that the staff is not responsible for any personal property left in the vehicle.

“I remember a couple weeks ago, we took RamRide and a girl said ‘Everyone sign the thing and then we’ll go,’” Jacobs said. “By the time Nick was signing it, we were already on the road. That’s when we hit the car and the clipboard went straight into (Bosen’s) head.”

But even if Bosen had finished signing the waiver, he still could have ended up with a gash in his head. RamRide policy does not require passengers to hand over their clipboard once they are finished filling out paperwork.

“I would definitely say that it’s something we can change and something that we can bring up during the training of our volunteers … ” said Robert Duran, chief of staff at the Associated Students of CSU.

The Chevy Impala’s driver and navigator from Nu Alpha Kappa could not be reached by time of print.

Despite Bosen’s experience with RamRide, he still plans on using the service in the future. He said he has used it about 10 to 20 times and that this one started out not different.

“He (the driver) was driving fine. I definitely don’t think it was RamRide’s fault. It was more of a freak accident if anything,” Bosen said. “ … I’ve always had a good experience with RamRide. everything’s gone smoothly. I’ve never had a problem with them before, so I wasn’t expecting an accident like this.”

“This is extremely rare. I was going back through records today and the last time that we know of a collision happening … was in April of 2006,” she said.

Despite not having precedent to follow, Ewing said her team sprang into action. Two RamRide directors –– herself and junior communication studies major Beau Loendorf –– went to the scene of the collision after it occurred.

RamRide also informed multiple university officials about the accident the same night, who forwarded the information to CSU case managers who follow up with students who go through traumatic incidents and offer support.

The director hopes that students aren’t discouraged from taking RamRide in the future because of the collision.

“When you’re running a safe ride program, accidents are going to happen,” Ewing said.
“We want students to know that we are taking care of them and their safety is our highest priority.”