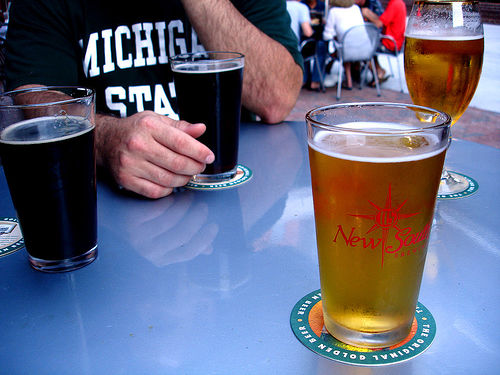 As the Beverage Business Institute celebrates its first birthday at CSU this year, the program’s directors have one wish in mind –– that the program will one day have an Masters of Business Administration (MBA) program for students looking to enter the beverage industry.

Currently, the program offers a certificate in Beverage Business Management, with two tracks for participants to choose from: an emphasis in wholesale/distribution management or a focus in brewing operations management.

“As the program first started, the need for a certificate arose,” BBI Director James Francis said. “It eventually morphed into a certificate for professionals who are in the beverage industry.”

In order to obtain a certificate, participants must attend four different workshops set up by the Institute. The workshops are two and a half days in length and feature seminars, guest speakers and tours of local breweries and beverage distributors. Francis also said that they tour the Wal-Mart distribution center to look at their distribution methods.

One factor contributing to the BBI’s need for formal education in the beverage industry comes from its placement in the middle of the “Napa Valley of Beer.” Northern Colorado has more craft breweries per capita than almost any other region in the US, and according to Francis, there are around 140 microbreweries in the state of Colorado, with 70 more in the planning stages. He also said that Colorado produces more beer than any other state.

In an email, Assistant Director of the Center for Professional Development and Business Research at the College of Business, Felicia Zamora, said that the BBI is proud to be located where it is.

“There is a reason that this region is called the ‘Napa of Beer,’” she said. “The Beverage Business Institute is another means for this specific niche of industry to remain educated and competitive.”

The BBI is not only expanding its education opportunities, but is also working to further its reach into the Fort Collins and CSU communities. With a grant from High Country Brewing, the BBI will be launching a responsible drinking program to encourage safe drinking practices for students and the Fort Collins community. Francis called it the BBI’s “corporate social responsibility” to spread messages of responsible drinking to students and community members.

Eric Smith, director of sales and marketing at Odell Brewing Company and one of the founding donors of the BBI said that the Institute has the full support of the company when it comes to responsible drinking initiatives.

“We are fully behind any and all responsible drinking measures,” he said.

One other way the BBI has been using its influence to strengthen members of the brewing industry, according to Smith, is by bringing in new people from outside of Fort Collins.

“This allows people to try new beers they never had the chance to drink before,” Smith said. “It gets people used to drinking new drinks.”

Zamora said that if one sector of the beverage industry is successful, everyone else benefits.

“If one craft brewery does well, it brings more attention to the beer industry in general and to the community,” she said. “An entire city and its other businesses thrive from the success of an individual brewery, and collectively from what breweries offer to the area in terms of exposure, tourism, and community experience.”

The BBI started in the summer of 2011, with its first set of workshops and certificates completed on Aug. 24. The next workshop is scheduled for Nov. 7-9.

Collegian Writer Sean Meeds can be reached at news@collegian.com