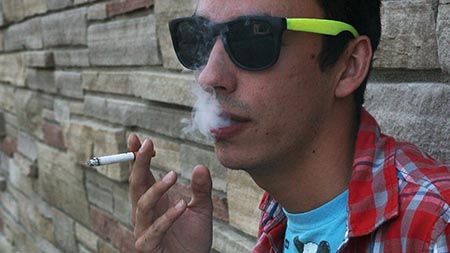 The university’s tobacco policy is being revisited by student government officials seeking public opinion on whether smoking should be banned from CSU.

The philosophy department is hosting a debate on the issue on Thursday in Clark A room 205 at 4 p.m.

According to Audrey Purdue, Associated Students of CSU director of health, the debate will help open a conversation about whether banning tobacco use on campus is something students, faculty and staff would support.

But not every student thinks the topic deserves this much attention.

“I would say there aren’t enough smokers here for it to be an issue,” said senior biology major Katie Earixson. “Especially living in Colorado you’re aware that most people don’t smoke so I think most people try to be respectful about it.”

“I would definitely support the ban,” Rentschler said. “I think they should still have designated smoking areas on campus but it’s always really obnoxious when you’re walking by Clark and Eddy.”

“There’s so little a survey can tell you,” Purdue said. “It only represents a snapshot of campus.”

The survey results will be made public at the end of September and Purdue will begin presenting the findings to different counsels on campus.

“I want every single person I present this to to take it back to the entity they’re involved with on campus,” Purdue said. “I want the whole campus involved in making this decision.”

According to Purdue, possible next steps include researching what places on campus are most affected by on-campus smoking. Areas like residence halls and congested walkways between buildings will be given special attention.

Smoking causes 11 different types of cancer, cardiovascular disease and lung diseases. Second hand smoke can cause bronchitis, pneumonia and asthma, according to Andrea Coryell, assistant director of Alcohol and Other Drugs Health Education and Prevention Services at CSU.

“We hear from many students that they plan to quit when they graduate,” Coryell said.

Second-hand smoke can cause flare ups in pre-existing conditions like asthma, Coryell said.

“Tobacco smoke is dangerous not only to the smoker but also to those around them,” Coryell said. “There is no safe amount of second hand smoke.”

According to Coryell, cigarette filters actually speed up nicotine absorption.

“Filters make cigarettes more addictive,” Coryell said. “Even smoking only on occasion can cause harm to your body.”

One student pointed to a caveat in the debate.