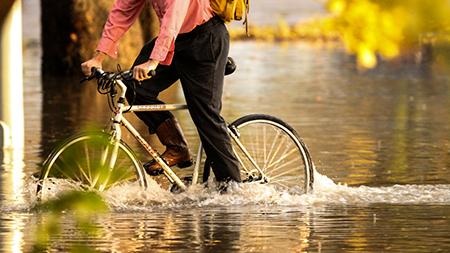 A torrential rainfall hits Fort Collins and causes mass floods all round campus and the city. (Photo by Hunter Thompson)

A thunderstorm pounded CSU and Larimer County Wednesday evening that shut down parking lots and caused minor flooding in buildings on campus.

The city of Fort Collins website showed areas around the university received more than an inch of rain over the period of about an hour starting at approximately 4:45 p.m.

Other parts of Larimer County received between a quarter and a half inch of rain.

This led to some parts of campus being shut down. Sections of the parking lot north of the Lory Student Center had about 8 to 12 inches of standing water. CSUPD had stationed patrols at the entrance to the parking lot and weren’t allowing cars to enter.

CSUPD said the storm also caused minor flooding in the Rockwell basement, the basement of Green Hall and the Engineering Building. CSUPD and Facilities Management are addressing the flooding and assessing any damage, which appears at this time will be minor.

Small crowds of students gathered outside the Lory Student Center as they debated whether to trudge through the standing water to get to their vehicle.

“I might brave it, but I don’t know if it’s the smartest thing to do,” said junior business major Cameron Delphia as he surveyed the semi-flooded parking lot.

According to the national weather service, Weld county is the only area to have been issued a flood warning.

The standing water at CSU was also the first report the National Weather Service had received of any water damages from the storm.