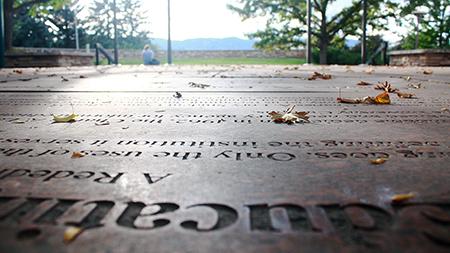 Twenty-five years ago a time capsule was buried underneath this stone slab outside the West Patio of the Lory Student Center. Now it has been dug up to give today's students a glimpse into the past of what student life was like in 1987.

Most time capsules stay untouched until their designated opening date, but in CSU’s case, that wasn’t really an option.

CSU decided to celebrate the 25th anniversary of the LSC by burying a time capsule filled with mementos in 1987. The box was supposed to stay untouched for 25 years, but its builders never imagined that the west patio would one day be submerged in Spring Creek.

“It was already opened because of the flood in 1997,” said Doni Luckutt, the director of marketing for Colab, the LSC’s marketing shop. “Everything was immersed in water, you don’t want to have this big unveiling when everything has turned to dust.”

The LSC, in conjunction with Colab, will be showcasing what was encased in the time capsule 25 years ago — or at least what wasn’t destroyed by the flood — throughout today with both a video presentation and display of the box’s artifacts on the Plaza.

“There were some things that didn’t make it, unfortunately,” Luckutt said. “It was under the granite, then there was rebar, concrete and plywood. Then they had the acrylic box and everything inside was wrapped in plastic.”

Even 15 years after the flood, the time capsule still had water inside of it.

“There was about an eighth-inch of water in the bottom when we opened it,” said Tony Pang, the assistant director of the LSC. “It also had plenty of mold inside of it.”

Neither Colab or the LSC would comment on the time capsule’s contents, saying that in order to find out, students would need to come see the display in person.

In addition to viewing the contents of 1987’s time capsule, students visiting the event will have the opportunity to contribute items to the 2012 time capsule (set to be opened during the LSC’s 75th anniversary in 2037).

“People love nostalgia,” said Luckutt, who was an undergraduate student in 1987. “Either to remember that’s what it was or to see what it was really like back then.”

“I think something that would be interesting to see would be menus from restaurants,” said Ken Kirkland, one of CSU’s history teachers. “Or possibly something from the Bookstore, both to see how food has changed and what the bookstore looks like 25 years from now.”

Students can bring anything that they think would express the morals or favorite memories about student life during 2012.

Collegian Reporter Marcus Moritz can be reached at entertainment@collegian.com.