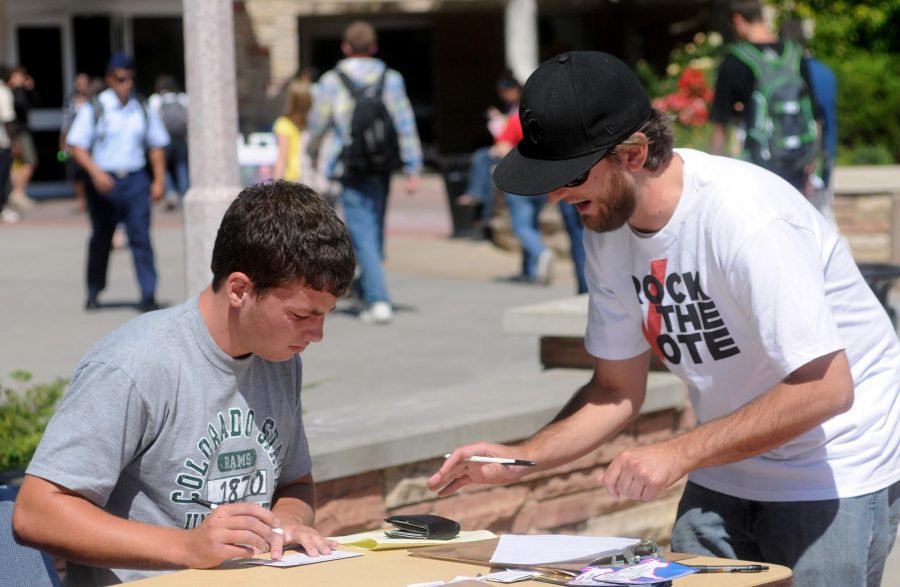 Sept.  25, 2012 marks the first concentrated effort by businesses, celebrities and organizations across the country to register people to vote, according to the National Voter Registration Day website.

The League of Women Voters of Larimer County will register people to vote on campus and provide election information with the help of  CSU’s Student Leadership, Involvement & Community Engagement (SLiCE) office. The groups will be in the Lory Student Center from 10 a.m. to 2 p.m. and Morgan Library from 11 a.m. to 2 p.m.

“(Voting) should be seen more as a part of your life…sometimes with all the political rhetoric, attack ads and politicians’ different messages out there people forget that and are kind of turned off to the whole process,” said Jessica Reeves, the marketing partnership director for Voto Latino, a group that helped create the event.

“What we’re trying to do is encourage people to educate themselves about the process and remind them that voting shouldn’t be a dirty word,” Reeves said.

According to Reeves, 11,000 groups have registered nationwide and pledged to encourage voter registration, whether through campus events like CSU’s or piggybacking off events like the Jason Mraz concert at Red Rocks.

To vote in the Nov. 6 election, Colorado voters need to register or update their voter registration by Oct. 9. Updates are needed if a person moved since initially registering or if he or she did not vote in the 2010 election, according to Pat Griego, organizer for the League of Women Voters Voter Registration Drive.

Students who are not from Colorado can register online to vote by mail-in absentee ballot, which is what Nicole Payne, a sophomore equine science and psychology major from Arizona, plans to do.

“It’s important to vote as a citizen of our country and be responsible, and important to take advantage of that privilege,” Payne said. “I don’t think it matters how people vote as long as the vote is well-educated.”

Although it is tempting to believe that voting in Colorado produces a greater effect on the election because it is a swing state, ultimately every vote in every state counts, according to Griego.

Julia Imhoss, a junior chemical and biological engineering major from Texas, registered to vote in Colorado instead of her home state because of Larimer County’s swing status.

“I really wanted to feel like [my vote] counted — voting in Colorado seemed like a better thing to do,” Imhoss said.

According to Reeves, part of the difficulty of encouraging people to vote is that some think that single votes do not count because of the electoral college system.

Often in a lot of traditional Republican or Democratic states, elections are won by a few thousand votes in communities where thousands of people did not register or participate, Reeves said.

“That kind of thinking of ‘Your vote is only going to matter in places where the race is close,’ I think discounts the power that your vote really does have,” Reeves said. “If every single person turns out, I think that a lot of the states that traditionally vote one way or another [would have a surprising result].”

The League of Women Voters of Larimer County came to campus Sept. 17 and registered 40 people with paper registration forms and more online, according to Griego. This year the organization has registered or updated registration for 340 people in person, but couldn’t estimate how many students will be registered today.

Students can also register to vote online, by mail, fax and email.