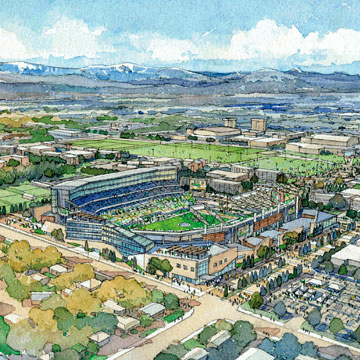 The decision was supposed to be made in May. And then in August. And now, the fate of CSU’s proposed on-campus stadium won’t be decided until the October 4-5 CSU System Board of Governors meeting.

“There was never a hard deadline,” said CSU Spokesman Kyle Henley. “It just became a more thorough process, and the committee just wanted to look at more information.”

The Stadium Advisory Committee (SAC), which was formed earlier this year, was initially charged with presenting CSU President Tony Frank with a recommendation whether or not to move forward with an on-campus stadium.

Over the course of the SAC’s process, giving Frank a recommendation morphed into conducting a feasibility study. During the committee’s final meeting on Aug. 9, committee co-chair and university Vice President for Operations Amy Parsons said an on-campus stadium is feasible.

But Frank said he still had reservations about moving the project forward. His biggest concern was whether or not he was willing to dip into CSU’s general fund to subsidize funding shortfalls in the event that private donations and naming rights aren’t enough to pay for the estimated $246 million undertaking. If approved, the stadium could be open by 2015.

“I don’t intend to be hurried in my decision, nor do I want it to dominate our university discussion as it has come to,” Frank said.

According to a study from the market analysis and funding sources subcommittee, the amount of private support for the stadium could total anywhere from $45 to $220 million. Committee chair and Vice President for Advancement Brett Anderson emphasized that fundraising will not begin until Frank makes a decision about the stadium’s future.

During the Aug. 9 meeting, the SAC also discussed the potential fate of Hughes Stadium. In a study conducted by the design and best practices subcommittee, it was determined that, in order to keep Hughes operable, more than 40 projects would be need to be completed over the next 10 years, totaling $30 million.

“[Hughes Stadium] is still categorized as being in fair condition, and it has a lot of components that are still new,” Parsons said.

The deliberation process about the stadium has been controversial since its inception. Save Our Stadium: Hughes was created by a group of Fort Collins community members in opposition to the project, and another group, called Be Bold, was soon created in its support.

On July 30, Frank hosted an open forum where the public could express their opinions on the controversial project. It lasted for four hours.

“The day may come when we need a new stadium,” Jerry Galvadon, a former employee of CSU athletics, told the Collegian during the meeting. “Right now, we’re not ready for it.”

“People are very passionate on both sides,” said Ryan Wulff, a stadium supporter and member of CSU’s Ramclub. “Both sides believe the other is the vocal minority.”

Editor in Chief Allison Sylte can be reached at news@collegian.com.