The CSU campus prepares for a presidential visit 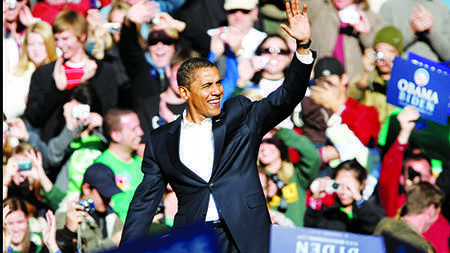 President Barack Obama greets the 45,000-50,000 gathered supporters on the Oval when he visited Colorado State on Oct. 26, 2008. Obama is scheduled to revisit CSU again next Tuesday, Aug. 28.

Like a comet that is only seen from Earth every 55 years, a sitting president will again set foot on CSU’s campus Tuesday. President Barack Obama will speak at 5 p.m. in the Monfort Quad. The event’s entrance will be between the Clark and Eddy buildings, and doors open at 2 p.m.

“It’s obviously exciting no matter what party you are because a sitting president is visiting the school,” said Brad Dick, president of the College Republicans at CSU. “It definitely heightens the political atmosphere.”

As part of a grassroots events tour, which includes Iowa State University, CSU and the University of Virginia, President Obama will speak about his vision of growing the economy through education, according to a press release from the Obama campaign. Obama will also encourage voter registration and the importance of voting.

“I’m most excited to see him come to Colorado. He recognizes Colorado is a swing state, and that the youth vote is a major turning point in the election,” said Kelsey Maez, president of the CSU College Democrats. “As cliche as it sounds, we are the leaders of tomorrow, and it’s awesome to hear that from the president.”

While ticket-holding attendees wait for the event, the CSU College Democrats will hand out candidate information, answer questions and register voters, according to Maez.

A counter rally will be held at 1 p.m. at the corner of Meridian and University Avenues featuring the Romney campaign bus. The Colorado Chair for Young Americans for Romney, Aslinn Scott, and former Lieutenant Governor Jane Norton will speak at the event.

The rally is opportunity for Romney supporters to disagree with the president, and a chance for independent voters to gain information about the Republican candidate, Dick said.

Other students are prepared for the president’s arrival as well. Evan Wilson, a freshman biology major, predicted a heightened tension on campus with an influx of students and community members who might engage in impromptu debates.

“I think it’ll be good. I’m not a big fan of Obama, but it will give students insight into his political aspirations for the next four years if he gets reelected,” Wilson said.

Although she may have class during Obama’s speech, junior journalism major Hannah Cornish thought it was a great opportunity for students to see someone as important as the president on campus.

“People are eager to go see him and it’s a perfect time with the election coming up. I feel like it’ll be definitely busy, but I don’t feel it’ll be mass chaos, either,” Cornish said.

The increased number of people on campus will be somewhat disruptive, according to CSU spokesperson Mike Hooker, and he recommends patience and taking extra time when going to class. Although inconvenient, it is important for a university to have significant political events on campus, Hooker said.

“It’s a great opportunity for our students to see part of the political process and to see the president of the United States on a college campus,” Hooker said. “(It will be) a valuable and hopefully memorable experience.”