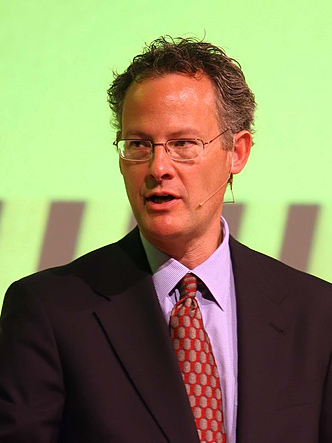 Wake up, roll over, check your text messages.

Get out of bed, walk over to the computer and check your Facebook feed and email.

Repeat hundreds of times throughout the day.

This type of behavior, according to Pulitzer Prize finalist and New York Times bestselling author Nicholas Carr, has rapidly become commonplace. The result, he believes, of our minds being shaped by the steady stream of information we’re constantly immersed in as our lives are increasingly spent online.

Speaking to a crowd of about 450 people at the Hilton Wednesday evening, Carr talked about his realization years ago that he was no longer able to have periods of sustained concentration and seemed to have lost the ability to focus on one task for extended periods of time.

“At first I thought it was middle-aged mind rot,” Carr joked. “Then the more I thought about it the more I realized my brain really wanted to behave the way it behaves when I’m online.”

This set him off into two lines of research, which was the basis of his book “The Shallows: What the Internet is Doing to Our Brains.” The first line of research looked at how the Internet is rewiring our brains on a neurological level. The other looked at how historical events and technologies, such as the mechanical clock and the industrial revolution, changed human thought.

Unlike other forms of technology, Carr said, the Internet and digital media is something we carry with us constantly. As we flit from webpage to webpage and constantly check our email, the ability to shift out of that mode of thinking when we’re offline is diminished.

“It’s such a powerful kind of distraction — technology and interruption technology — that it becomes a problem when you can’t really experience anything,” Carr said.

This is compounded by the fact that many Internet companies have financial incentives to get us to click on as many links as possible every time we’re online.

The end result, Carr believes, is that while we gain benefits like being able to collaborate and rapidly gather information, we’re also losing deep creativity, the ability to concentrate for long periods of time and solitary, contemplative modes of thinking.

People who attended Carr’s lecture said they could relate to having lost the ability to concentrate and stay focused for long periods of time.

Sophomore physics major Curtis Bear said he read online articles Carr had written, which is why he decided to attend the lecture.

“What he had to say was really interesting. I can definitely relate to everything,” Bear said. “I am always whipping out my phone in class to see if I got a text.”

“I spend all day coding computers, which takes an immense amount of focus,” Safferfield said. “It’s ironic that people in jobs that require so much concentration are ruining everybody else’s concentration. It does put a new spin on ‘Revenge of the Nerds.’”