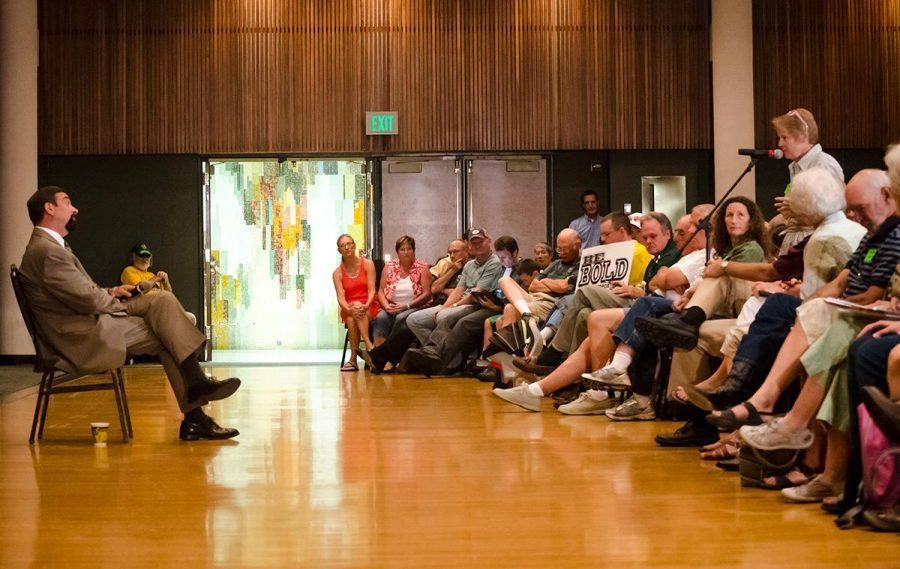 Seated in a single chair, CSU President Tony Frank faced a full house Tuesday night, listening to the public, express their opinions on the stadium. This forum existed as the final public discussion of the stadium’s potential construction.

“There’s been a rumor that we’re limited to an hour. We’re not. I’m going to stay and listen as long as people have things to [say] — well let’s see how it goes,” laughed Frank. “I’m getting older, my bedtime’s earlier than it used to be.”

Many began their appeal addressed directly to Dr. Frank, praising the president’s efforts to create a transparent conversation.

“I have a lot of respect for Dr. Frank, listening to all sides. I think it’s fantastic he’s doing that,” said Ryan Wulff of the CSU RamClub. Wulff supports the construction of an on campus stadium.

However, such compliments did not overshadow critiques of a new stadium.

“There are too many unknown factors,” said Jerry Gavaldon, who began working in CSU athletics in 1966 and worked as the general manager to concessions in Moby and Hughes from 1980 to 1990.

“The day may come when we need a new stadium,” said Gavaldon. “Right now, we’re not ready for it.”

While the perspectives consisted of a wide range of opinions, most who showed up to the forum already had set opinions, according to Wulff.

“People are very passionate on both sides,” said Wulff. “Both sides believe the other is the vocal minority.”

Senior communications studies student Will Reutemann stopped by the forum after finishing an intramural softball game and decided to join the line of people waiting to address Frank.

“I can kind of relate to where the community is coming from and I think we have to address those issues,” said Reutemann who works for the Center of Community Deliberation. “But if I had to pick a choice, in the long run I think the stadium is going to be very beneficial for this campus. ”

For Reutemann, events like this, while engaging, serve only divide the two opposing sides further.

“I feel that public forums as this particular one where you’re coming up to a microphone, speaking directly to Frank, kind of reiterate those divisions, said Reutemann.

Reutemann says smaller, mediated discussions like the ones conducted by the Center of Community Deliberation create a more effective conversation.

“We create a process where we allow both parties to come and speak with one another and we’re not looking to provide a solution, but we’re providing a space where people can talk back and forth and respond to each other,” said Reutemann. “Sometime they have revelations and are like oh, I never thought of it that way; I didn’t understand that and so those create more of a dialogue.”

The Center for Community Deliberation hosted approximately ten public deliberations during the spring semester, according to Reutemann. He noted that the student voice was often unheard at these meetings.

On August 9, Dr. Frank expects a final report from the Stadium Advisory Committee.