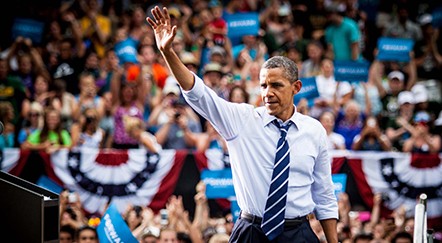 A presidential visit brings a lot of baggage: secret service, traffic, political ideologies of all kinds, the national eye, and, most importantly, stories from a crowd that will never forget seeing the most powerful man in the world. Here are some stories from President Barack Obama’s visit to CSU Tuesday.

Baby photos with the President

Take a baby to a political rally and it just might get a photo with the candidate.

Take two babies to two rallies and you might be pushing your luck.

Shannon Sharrock, a Fort Collins resident, had the opportunity to have her baby photographed with the then-presidential candidate at his speech at the CSU Oval in 2008.

After the speech, Obama shook the hands of people standing in Sharrock’s area, and stopped for a quick photo-op with Devin, Sharrock’s six-week-old daughter.

So when she heard that Obama was coming to Fort Collins again, Sharrock thought she would try to get another picture: this time with her three-month-old daughter, Finley.

But because of the heat, the sun and the crowded standing area, Sharrock decided it wasn’t worth it and left before Obama spoke.

“It was disappointing, but I knew if the conditions weren’t right, I wasn’t going to get her in any kind of harm’s way,” Sharrock said.

Memories of an inauguration

It was the first time she had seen Barack Obama since his election.

Ava Caradine, a resident of Little Rock, Ark., came to Colorado to drop her daughter off for her freshman year at Colorado College in Colorado Springs.

While planning her trip, she saw that President Obama would speak at CSU and decided to take the opportunity to see him speak — again.

In 2008, Caradine attended Obama’s inauguration in Washington D.C. as part of a trip sponsored by her local Martin Luther King, Jr. Commission.

She said she supported Obama in 2008, and will support him again, volunteering for the campaign.

“I think he’s trying real hard to do what he promised,” Caradine said. “He just needs more time.”

News from the Republican Convention

While Obama spoke to a crowd in the Monfort Quad, two libertarian students standing outside of the fenced-off area got disappointing news.

Scott Phillips, a junior finance major, and Sam Fischer, a sophomore history major, learned during the Obama speech that their candidate of choice, Ron Paul, had officially lost the Republican nomination at the Republican National Convention in Florida.

In spite of the change, the two decided to stay where they were with a group of other libertarians voicing their views while the president spoke nearby.

“A lot of people can connect with the name Ron Paul, and they’ll associate it with the liberty movement through that,” said Phillips, who was continuing to hold a Ron Paul sign. “It’s not about Ron Paul; it’s about the movement.”

Both Phillips and Fischer were in high school in 2008, but supported libertarian ideas even then. Phillips said that although he disagrees with the president’s views, he thought he had a right to be on campus speaking.

“[The speech is] bringing a lot of political leanings here today, and it’s a chance for everybody to voice their opinion as long as it’s civil,” Phillips said.

When President Obama won the election and gave a victory address at Chicago’s Grant Park, LeClaire didn’t attend. Then a high school student, he went to class instead of attending the speech, which left him feeling disconnected.

Now a business major at CSU, LeClaire wanted to make up for missing a chance to see Obama four years ago. So instead of heading to his accounting class on Tuesday, he waited in line to see the president’s speech.

“I figured this would probably impact the accounting world,” he said.

“When you’re 17, you think the president can change everything,” LeClaire said. “As you get older, you realize how bureaucratic things are.”

News Editor Elisabeth Willner can be reached at news@collegian.com.