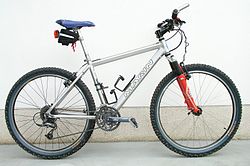 On a campus where nearly 15,000 bikes pass through per day, and in a town named the 11th most bike-friendly town in the country according to Bicycling Magazine, there are rules and regulations one must follow in order to ensure safety for cyclists and pedestrians alike.

As students prepare for the new school year, however, reading the bike safety manual given out by CSUPD might not be at the top of everyone’s to-do list. So to help avoid those awkward encounters with the bike cops, here’s a list of the most important things to know when using a bike on campus.

#1: Bikes are, according to Colorado law, considered vehicles.

This means that when riding a bike, all traffic rules must be followed.

“The number one misconception among students is thinking that bikes are treated like pedestrians,” said Joy Childress, Traffic and Bicycle Education and Enforcement Program Coordinator at the CSU Police Department. “People always think they don’t have to stop at stop signs or they forget to give a verbal signal when they are about to pass someone.”

#2: Cyclists riding at night need to have a front light and back reflector on their bike.

This is especially dangerous at night when motorists are less likely to see a cyclist in the first place. Using a flashing light on the front of your bike and a reflector on the back of your bike can alleviate these problems and help motorists and pedestrians alike see where cyclists are located.

#3: There is no bike riding in predetermined dismount zones on campus

All of the zones are clearly marked and are in effect from 7:30 a.m. to 5:00 p.m. These dismount zones also apply to skateboards and inline skates.

“I take the dismount zones and bike safety regulations pretty seriously on campus, and that’s mainly because I don’t want a bike cop to chase me down,” said Kristian Cowden, a senior psychology major. “I’ve never gotten a ticket from them, and I hope I never will.”

The CSU Police Department issued some 666 traffic violation tickets to cyclists last fall, according to Childress, who added that the majority of these were issued because the cyclist had broken one of the rules above.

The majority of these tickets are issued in the fall.

“Wear your helmet, even though no one else does.”
Related articles