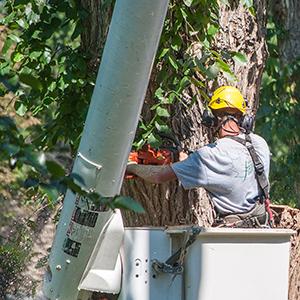 On July 23, two American Elm trees, planted when the Oval was designed in 1909, were carefully cut into pieces and taken to the Fort Collins city dump. To the untrained eye the trees appeared to be in perfect health, but beneath their bark lurked a danger to every other tree on the Oval.

“These trees have Dutch Elm disease,” said Marc Fine while watching the ancient trees come down. His son, Josh Fine, owns the company that was contracted by the university to remove the trees.

“Dutch Elm Disease is a fungal disease that clogs vascular tissue of trees and quickly kills the entire tree,” said Fred Haberecht, Assistant Director of Facilities Management, in an email. “The fungus can be transmitted tree to tree by an insect or root to root in cases where tree roots of separate trees graft together.”

According to a CSU Extension article, the elm bark beetle burrows into the tree to lay eggs and in the process introduces the fungus into the tree’s water-conducting system. The fungus spreads throughout the tree and begins to plug this system, causing the tree to slowly starve over the following months.

A root graft occurs when two trees’ roots become entangled so severely that they grow together, allowing the trees to share water and nutrients. Dutch Elm Disease can be transferred between the trees through such a graft, even after an infected tree has been removed.

“I think the tree they took down was next to one that they took down last year and they think it could have been a root graft,” said Jim Klett, CSU Horticulture and Landscape Architecture professor in an email. “Sanitation is a good prevention technique and the campus is doing that right away by removing the tree.”

The trees removed cannot be used for mulch or recycled in another way, and must be taken to the city dump to prevent the spread of Dutch Elm Disease.

“The diseased tree and those immediately adjacent to it [were] removed as a precaution to prevent the spread of the disease to other trees on the Oval,” said Haberecht. “Best practices recommend the immediate removal of infected or suspected trees in close proximity, as well as soil trenching around infected or suspected trees to isolate the fungus and, if necessary, girdling and removing other nearby trees.”

In an area like the Oval, where the trees are very close together, a root graft can occur very easily and require the removal of many trees unless the roots are cut out as well.

“It would be nice to avoid cutting down large trees, but if it saves the others, it’s worthwhile,” said Steve Chignell, a first year masters student studying watershed science. “If we lost more trees on the Oval, that would be so sad.”

After a tree has become infected with Dutch Elm Disease, there are very few options other than to cut it down.

“You can inject the trees with a chemical but it is expensive, generally just done on specimen trees, and needs to be done every two to three years,” said Klett. “Good sanitation and keeping trees in good health by removing dead wood and keeping insects under control on [the trees] can help in prevention of the disease.”

The swift removal of infected trees, along with good tree care practices, will keep the number of trees that have to be removed to a minimum.

“It’s kind of a sad thing, they’re big, old, beautiful trees,,” said Melody Dodd, a mathematics graduate student, “but everything has its time.”