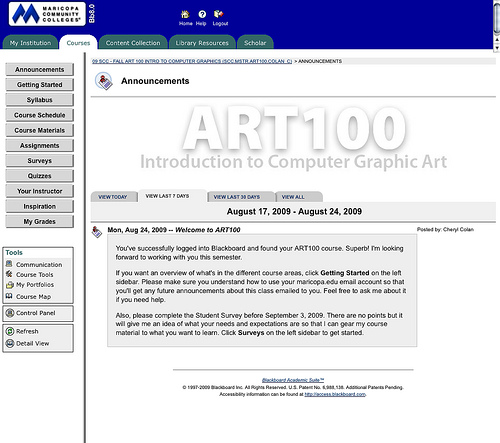 Students in Carol Seger’s cognitive psychology class didn’t notice the change.
“Nobody mentioned that it was different,” she said.
For Seger, the systems are largely comparable and have minor quirks that take “a few extra clicks” to figure out.
“Adding students and auditors and dealing with incompletes was annoying,” she said. “I don’t think it’s any better or worse — just different.”
History and political science major Jody Tippit prefers Blackboard to RamCT.
“It’s easier to access things and looks a lot nicer,” he said. “It seems like professors are having issues putting anything on there correctly though.”
CSU recommends that professors, “plan ahead to learn the new system and develop content early,” on its RamCT help website.
Journalism and Technical Communication professor Dani Castillo taught one of 50 pilot courses during the Spring, and sees the advantages of the new system.
“Some instructors at CSU may not be that happy with the new system just because, like any software, it takes a while to learn,” she said in an email. “I like Blackboard a lot better. Setting up the grade book is also easier in Blackboard, RamCT was super difficult.”
The one advantage RamCT had over the new Blackboard system, according to Castillo, was its customization options.
“I’m a web designer and can usually do a decent job at making it look good. The problem is that most teachers don’t have that training and can very easily make the environment look VERY ugly,” she said in an email.
Ultimately the success or failure of the system will be determined as it is used more often, but as for the summer everyone seems to be getting along with Blackboard just fine.
“It just took a little time to adjust,” Seger said.