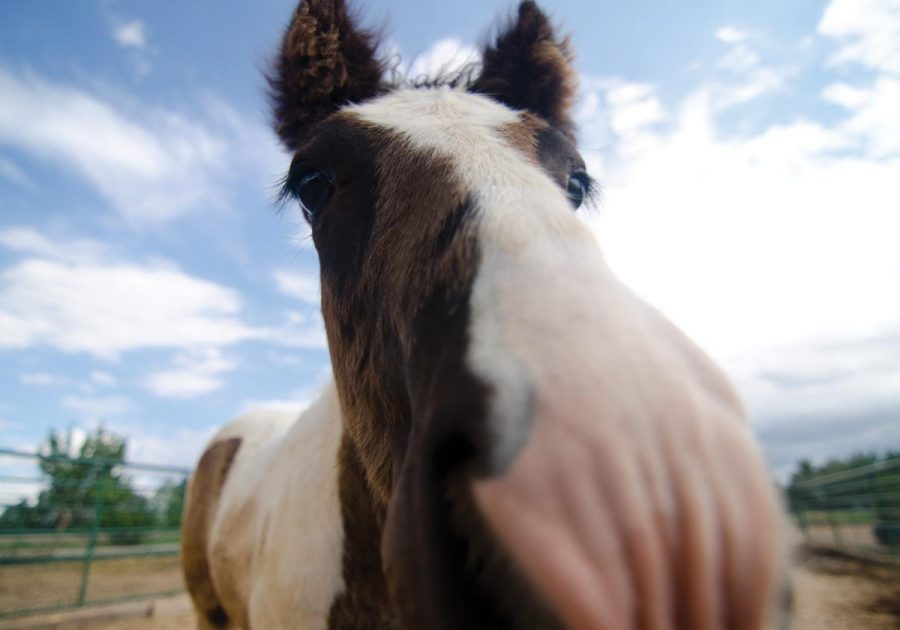 Cormac, a young horse owned by Charlie Cox, rushes the camera inside his stall near Wellington, Colo. Photo: Nic Turiciano

Dr. Jason Bruemmer stands inside a small shed at the Equine Reproduction Laboratory with his arm — all the way to his shoulder — inside a mare, searching for signs of an embryo. Not far away cranes, tractors and construction crews work to rebuild his office.

Bruemmer, a professor at the ERL, points to a small, fuzzy computer screen connected to the ultrasound camera he holds inside the mare, explaining the picture’s content to two students. Does noise from the construction disturb the animals?

“The short answer is yes.”

The ERL handles upward of 500 horses annually and instructs 120 students weekly, Bruemmer said, but on July 25, 2011, a fire leveled the property’s main building.The construction signals the early stages of the ERL’s rebuild.

“The walls were concrete, so they didn’t burn,” Bruemmer said. “When the fire got into the attic, that was all wood, so the heat just brought the whole thing down and it pretty much destroyed everything.”

The separate components of the ERL that used to live in those skeletal concrete walls are currently housed in a number of temporary wooden structures, but the new building, at 12,200  square feet and costing approximately $5 million to construct, will house in a single location the laboratories and teaching facilities lost in the fire.

“We had that originally, but it was exceedingly cramped. It was very difficult to have enough room in there to have students observe what was going on,” said Dr. Thomas Hansen, professor and director of the ERL. “We’ve incorporated a larger laboratory space so that students can actually see a lot better what the clinicians are doing in context to ultrasound, artificial insemination, embryo collections, embryo evaluations, sperm collections from stallions, sperm evaluations and then semen freezing.”

Funding for the rebuild is currently coming from a university loan to the ERL, Hansen said, but the construction will ultimately be paid for by insurance proceeds from the fire and donations from clients and supporters.

“There’s a history of people giving to the ERL because they buy in to the concept, the idea of training students while people are caring for their horses, and that’s why people continue to come back and use the services here,” Hansen said.

Some clients, however, have been less than satisfied with the ERL since the fire.

Charlie Cox, owner of Parnell’s Irish Cobs, is one of the 175 ERL clients who lost genetic material when frozen semen from his stallion was destroyed in the fire. Cox estimates his potential losses to be between $30,000 and $40,000. According to Cox, CSU’s outreach to ERL clients following the fire did not meet expectations.

“I think people like Hansen and Bruemmer at ERL have been working very hard behind the scenes to try and get some resolution for clients,” Cox added. “It may or may not come to pass, but I think it’s moving along.”

“I can understand (Cox’s) concern in not getting an answer; but, just like anything else with insurance claims and the legalities associated, it’s going to take some time to navigate through this,” Hansen said.

Cox, however, doesn’t see the fire as the end of his long relationship with the ERL, saying that he will continue to use their services in the future.

“I think that they are still a world class organization and I have a great deal of professional respect for the people at ERL. A little less so for people in various parts of the university hierarchy that have been very slow to address the losses suffered by some of their clients.”

The fire was an unfortunate event, said Mike Hooker, the CSU spokesman, in an email, adding that it has affected all publics involved with the ERL.

“It had a terrible short-term impact on the lives and daily activities of the ERL family.  The ERL family was in shock and hurt, similarly to many clients who lost equine genetic material in the fire,” Hooker wrote in an email. “However, since the fire, the ERL has worked diligently to communicate with clients and to design a new world-class facility.”
Related articles

Veterinarian Moves From Job At Disney To CSU(denver.cbslocal.com)

Equine Reproduction Lab to be rebuilt(collegian.com)