The Rocky Mountain Collegian • May 31, 2012 • https://collegian.com/articles/news/2012/05/delays-in-colorado-state-on-campus-stadium-deliberation-process-push-decision-to-fall-semester/ 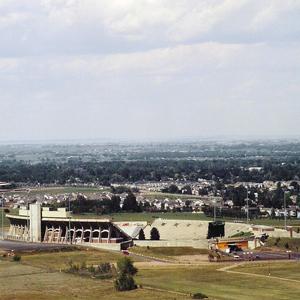 Another Stadium Advisory Committee meeting went by Wednesday, and there’s one more yet to come, but no finalized recommendations for the on-campus stadium have arrived yet for President Tony Frank.

A recommendation for the proposed on-campus stadium is close, but there’s still work to be done, the Stadium Advisory Committee told community members and students gathered in the North Ballroom Wednesday night.

Amy Parsons, the vice president for university operations and the co-chair of the committee, said that a time-consuming process caused the delay.

“We just didn’t get it done in time,” Parsons said, adding that President Tony Frank’s change of plans to wait until the fall to announce his decision encouraged the committee to take its time.

The committee’s recommendations to Tony Frank, which were originally expected by the end of the spring semester, will wait until a final committee meeting to be held in August, according to Parsons.

CSU spokesman Kyle Henley said that the extra time will enable the committee to get more opinions from stakeholders.

“I don’t think you can be too careful and too deliberate in terms of the way we keep looking at public input,” Henley said.

Athletics Director Jack Graham said the process of determining the feasibility of the stadium is about 95 percent done.

The aspects of the proposal which have been completed, according to Graham, include site selection, between Pitkin and Laurel; cost, now estimated at $250 million; and some factors of design.

Aspects that still need work include making sure the design will not surpass the proposed budget of $250 million and looking into whether upgrading Hughes Stadium is feasible.

The committee also needs to finalize what a redesign of the displaced student gardens and Plant Environmental Research Center (PERC) might look like, since the current design plan sits directly on top of the PERC greenhouses.

The sub-committees plan to research these elements and get additional feedback from the public before their final meeting in the fall.

Over the summer, neighborhood discussions will be held with Fort Collins residents that live near the proposed stadium site, and the Alumni, Campus and Public Engagement sub-committee will arrange an open forum with President Frank before he begins his decision-making process.

“After this committee, work is largely done but with a few mop up points,” said Tom Milligan, the vice president of external affairs and the head of the public engagement committee. “It’s kind of the turn of President Frank to begin to discuss the ‘should we’ element of this discussion.”

The architectural consulting firm Populous also released three watercolor renderings of the proposed stadium plan. Scott Radecic, the senior principal for Populous, presented the drawings and the stadium plan, which includes features such as premium seating and a new alumni-center.

Frank is expected to announce his decision about the on-campus stadium following the committee recommendation in the fall.