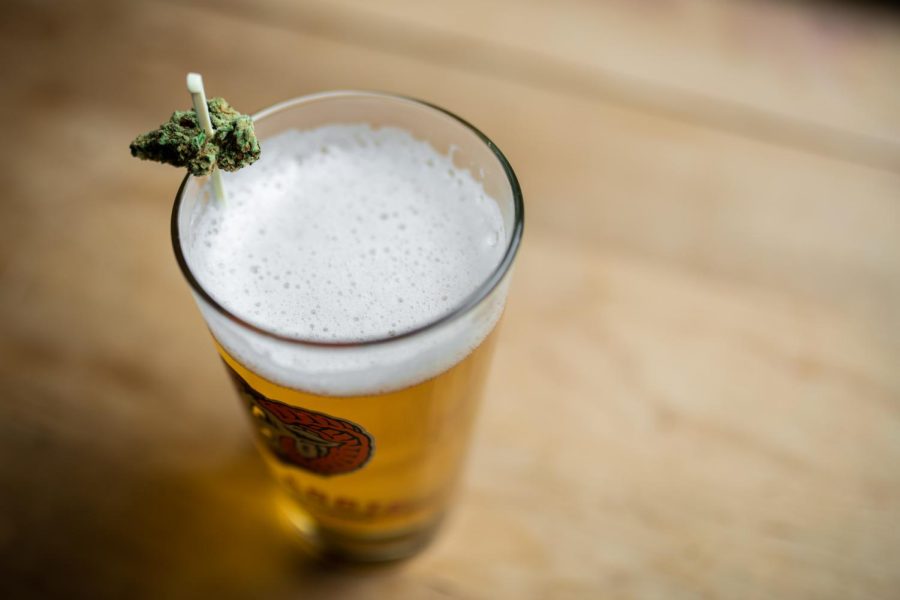 A cannabis bud rests on the rim of a glass of New Belgium Brewing's Old Aggie Superior Lager April 13.

Editor’s Note: This is a satire piece from The Collegian. Real names and the events surrounding them may be used in fictitious/semi-fictitious ways. Those who do not read the editor’s notes are subject to being offended.

For those who know what kind of beer they like and are looking to branch out, check out our list of ideal beer and cannabis pairings.
Fat Tire Amber Ale
This amber ale enjoyed by dads and classy enough for a restaurant or cookout is the most iconic and accessible beer to come out of Fort Collins. Fat Tire Amber Ale needs an equally accessible pairing — might we suggest half of a 20-milligram edible, along with very specific instructions not to eat the whole thing? If your uncle ends up ghost pale in the middle of a gastropub, that one’s on you.
Voodoo Ranger IPA
IPAs are enjoyed by a very specific and vocal group of people, while the rest of us try them only frequently enough to remember why we don’t like them. Obviously, these are best paired with a stiff dab at your weird friend’s house, followed by an evening of Storage Wars, Pawn Stars or really any History Channel program.
Coors, Coors Light
Another dad beer. As a tribute to Coors’ staying power in American culture, try to find some very bad weed. Head down to the basement, crack a cold one, pick out those seeds and stems and pack whole nugs into a hollowed-out cigarette. Cheers to the Rockies!
Natural Light
If you’re drinking Natural Light, you’re probably going to end up pairing it with a rip from an opaque silicone bong. My sibling in Christ, don’t think about the last time it was cleaned or what it looks like on the inside. Just keep it away from the light, and be thankful it’s not glass.
Pabst Blue Ribbon
A midwestern staple that became an ironic favorite of hipsters for a period in the 2010s before slowly fading back into obscurity? Better pair Pabst Blue Ribbon with some pre-weighed flower from LivWell Enlightened Health. It’s the budget option, and they were merged into Chicago-based PharmaCann, which is close enough to Milwaukee for this to track.
CBD-infused beer
A beer — or really any product — that claims to be CBD-infused is best paired with a bag of oregano that you bought off a high schooler. You just got scammed. Have a seat, watch a Fyre Festival documentary and think about what you’ve done.
Beergarita
Beergarita: y’know, one of those margaritas with an overturned Corona in it? A beergarita is best paired with a hit of a blunt offered to you in the alley behind the beach-themed bar. The night will either end with you asleep in a booth or in a different alleyway several towns over.
Nonalcoholic beer
Nonalcoholic beer would go best with a bowl of Delta-8 THC or CBD flower. This is the most convenient matchup, as you can purchase the cannabis at the same gas station where the beer came from.