Bringing issues of the border to light through creative passions 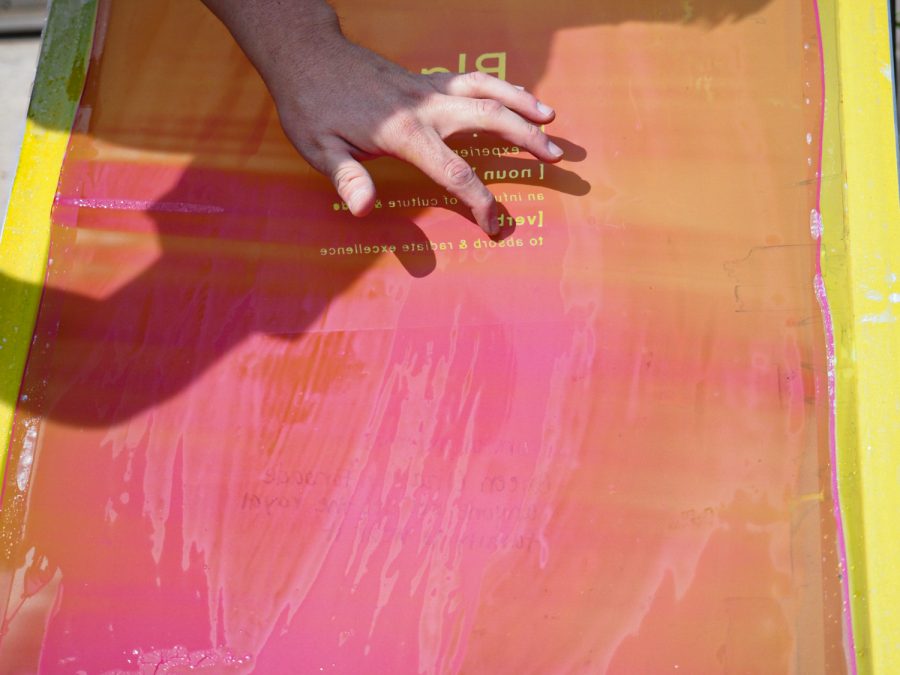 Vicente Delgado checks the lettering of his T-shirt design while washing the paint in the Visual Arts Building Jan. 22.

“Every morning we wake up, open the door, and we can actually see Mexico,” Vicente Delgado said, describing his family home in El Paso, Texas. Delgado’s house sits only 10 minutes from the border, and Delgado explained that this close proximity was a heavy influence in the making of his piece “Greetings.”

Delgado’s artwork depicts the familiar façade of a gas station postcard — these glossy designs can be found sending greetings from cities across the U.S. But the distinction between a regular postcard and Delgado’s interpretation lies within the letters of the word “border.” Each letter contains an artistic representation of true stories about the injustices surrounding the immigration process into America.

These stories begin at “B,” showing a 10-year-old Guatemalan boy abandoned in the middle of a desert; later on, “D,” showing Melania Trump’s controversial jacket donning the words “I really don’t care, do you?” that she wore for a visit to the border; and ending with “R,” showing two young girls crumpled at the bottom of the 14-foot barrier a patrol agent had just flung them over.

Delgado said he chose this subject as his premise because he couldn’t ignore the stories he learned while living next door to the border.

“I want to bring awareness,” Delgado said. “We just hear numbers (in Colorado).” Delgado wishes these numbers were accompanied by details of the tragedies that continue to befall many immigrants in hopes of calling attention to their rampant mistreatment. After graduating from Colorado State University with his master’s in printmaking, Delgado plans to return to El Paso and begin a career teaching his passion to others.