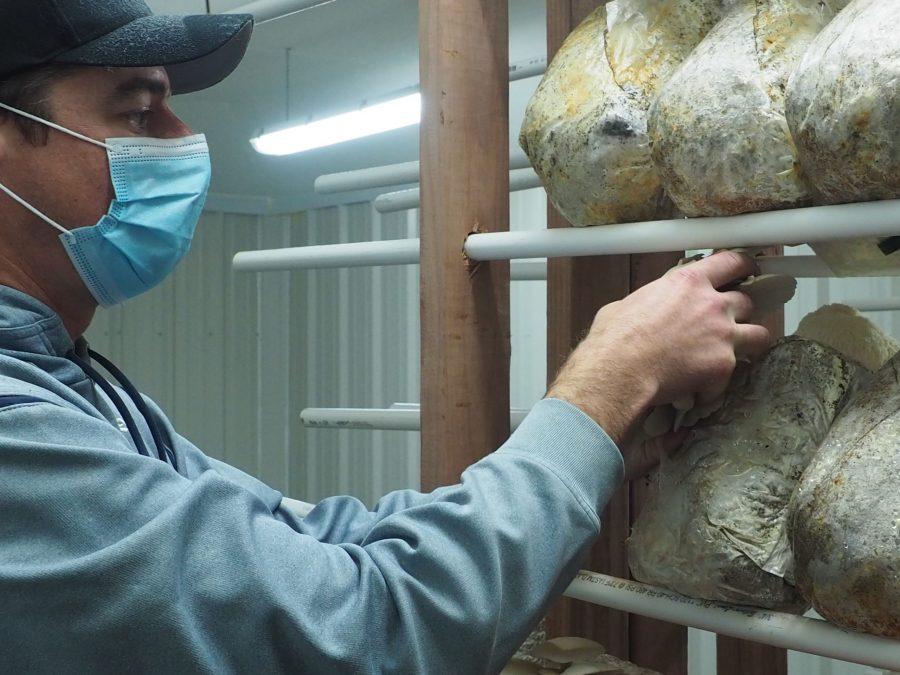 Jason Geib harvests PoHu Oyster mushrooms in his mushroom grow room. This is the last stage of the mushroom's development before it is ready to be harvested and either packaged whole or ground up to be made into a tincture. The grow room is kept at a consistent 62 degrees Fahrenheit, with the lights normally turned off. (Gregory James | The Collegian)

For Eaton resident Jason Geib, deciding to cut down hours on his full-time construction job in January 2019 and quit a year later was a leap of faith. He and his wife, Nikki, sold their house in Greeley to move with their three kids to a farm in Eaton, Colorado where they started the Willow Creek Mushrooms farm.

Since then, they have expanded their farm and renovated the old horse barn on the property into a fully functional mushroom growing building. They commute to Greeley and Fort Collins on the weekends to sell their mushrooms by the pound. From petri dish to plate, the Geibs control every aspect of production and distribution.

Now, the Geib’s are expanding to be more than just a mushroom farm. They own a herd of cattle they will sell as meat, chickens that produce eggs for them, goats that produce milk and rabbits that will be bred for meat.

The Geibs grow reishi; shiitake; oyster, including summer white; and lion’s mane mushrooms and hope to expand into growing other crops and using the land they own to the fullest potential.

“Everything out here, it’s harsh weather and it’s harsh in a lot of ways,” Jason Geib said. “But the rewards are greater as well. I like the hand to table sort of approach to things.”

Gregory James can be reached at photo@collegian.com or on Instagram @gregory.g.james.