Getting pamphlets with concentrate purchases? Here’s why 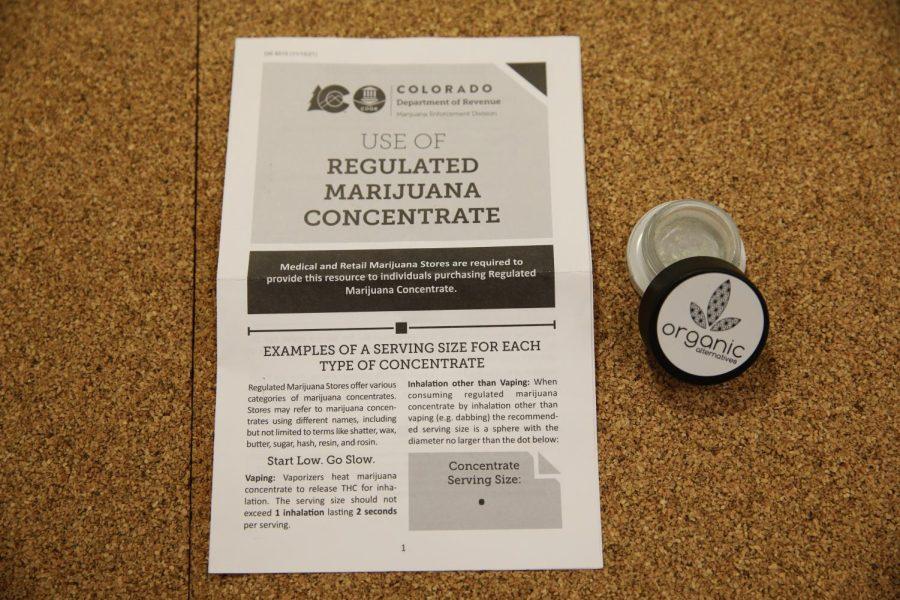 A photo illustration of the new pamphlet handed out when purchasing marijuana concentrate Jan. 25.

Colorado dispensaries began handing out four-page paper pamphlets Jan. 1 as the result of a law aimed at regulating cannabis concentrates and reducing teen accessibility to the product.

House Bill 21-1317 contains legislation promoting the safe consumption of concentrates by limiting purchase amounts and educating the public. This law, signed into effect in June of last year, required the Marijuana Enforcement Division to create a “tangible educational resource” for dispensaries to provide to anyone purchasing concentrates, whether a medical patient or retail customer.

“In statute, the requirement is for it to be tangible,” said Shannon Gray, Marijuana Enforcement Division communication specialist. “It was determined that meant physical, like a physical copy, so it couldn’t be on a QR code.”

The Collegian reached out to lawmakers who sponsored the original bill to determine how the word “tangible” came to be in the text but did not hear back.
It’s required to be offered to all individuals (who) are purchasing concentrates, but an individual can decline it if they’ve already received it or they know the information- Shannon Gray, Marijuana Enforcement Division communication specialist
Paper pamphlets create more waste in an industry that is already producing mass amounts largely due to the prevalence of single-use packaging and organic plant waste. Gray said the issue of sustainability came up in the rule-making process, but they were bound by the language in statute.

The pamphlet explains how to properly dose concentrates, suggesting users “start low” and “go slow.” It also contains educational resources aimed at younger people, including a link for “youth and marijuana” as well as the phone number for Safe2Tell, an anonymous tip line often directed toward students in middle and high school.

This educational resource provides information geared toward teenagers, who in most cases cannot legally purchase or consume cannabis. Recreational cannabis is illegal until age 21, and just under 0.3% of the population of patients with medical cards are under 17 years old, while 4% are aged 18-20, according to Colorado state data from December 2021. These pamphlets are distributed to every person purchasing a concentrate, regardless of their age.

Some local dispensaries are under the impression that they must hand the pamphlets out to every person every time they purchase a concentrate, whether or not they’re previously educated on its contents. This is not the case.

“It’s required to be offered to all individuals (who) are purchasing concentrates, but an individual can decline it if they’ve already received it or they know the information,” Gray said. “They don’t have to take it, but the budtender has to offer it.”

This adds an extra step for dispensary employees. “It’s as serious as checking IDs,” said Jamie, a local budtender who asked not to use her last name.

Budtenders are also hesitant to provide a stance on the pamphlets. Jamie’s co-worker expressed that employees are meant to hand out the pamphlets without an opinion.