Glassblowers in Fort Collins bring art to the cannabis industry 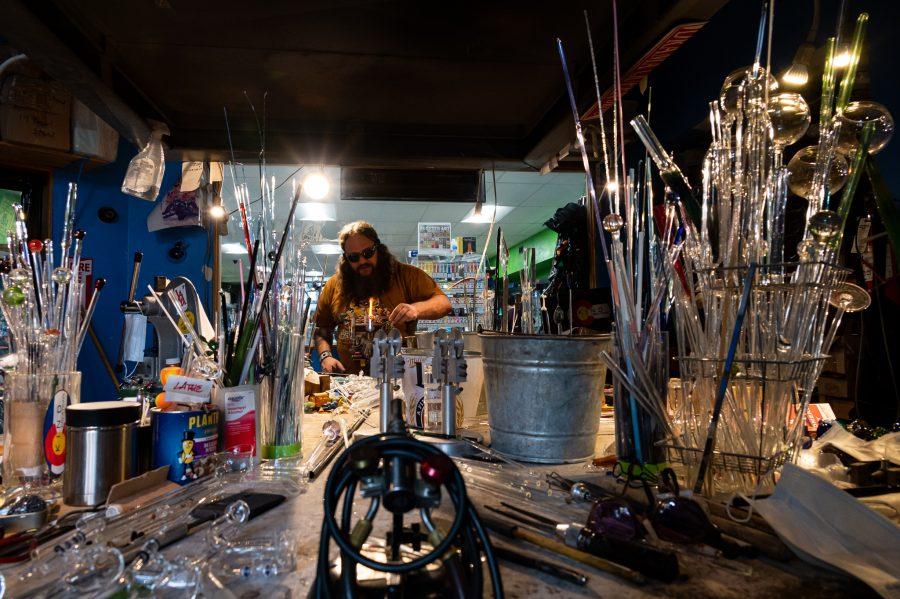 Skye Norton works in the Kind Creations glass blowing shop Nov. 9. Norton moved to Colorado and has been blowing glass for the past 20 years. (Milo Gladstein | The Collegian)

Editor’s Note: Read the Spanish version of this article here.

Glassblowers are essential to the cannabis industry. Without their carefully crafted art, smoking cannabis would just be dull. Glassblowing is an intense but rewarding craft, and each artist has their own unique story.

I talked to three Fort Collins glassblowers to learn more about how they got into the craft and why they love what they do.


Skye Norton (@skyepglass on Instagram)
Skye Norton was following the Grateful Dead on tour in the late ’90s when he saw someone blowing glass in the parking lot at one of the shows. This sparked his interest in glassblowing, which eventually led to a career in the industry beginning in 2001.

“I moved to Fort Collins, actually, to learn how to blow glass; that was my goal when I moved here,” Norton said. “I had worked at The Mishawaka and bought my first set-up and started blowing glass in one of the trailers across the street from there.”

Norton currently works out of Kind Creations and has been there for around three years. He enjoys crafting large, functional, sculptural pieces as well as smaller pieces like marbles and cups. He originally sold some of his work to Kind Creations owner Brandon Finke and then became an in-house artist at the store. Between working out of the trailer and at Kind Creations, Norton also has his own studio.

“I work for myself; I don’t have to answer to a boss,” Norton said. “If you do something you love, you never work a day in your life.”
Bryan Ratcliffe (@surfratglass on Instagram)
Because his mother was an artist, Bryan Ratcliffe grew up around art and the creative process. They lived in Evergreen, Colorado, on the side of a mountain, where his love for art and the outdoors began.

Ratcliffe was originally into ceramics but discovered glassblowing in college. He attended college at Western Colorado University in Gunnison, Colorado, where he got his start blowing glass pipes and pendants, learning from another art graduate. He graduated in 2001 and was a competitive snowboarder but eventually had to make a career decision.

“OK: Is my profession snowboarding, or is it going to be art?” Ratcliffe said. “The longevity of art seemed much better.”

Before attending college, Ratcliffe lived in Bali, Indonesia, for two years, and after graduating, he wanted to continue traveling.

“I love traveling — I love being outside the United States,” Ratcliffe said. “So what I did was I took all my stuff, and I put it in my car, and I drove to Canada.”

Ratcliffe spent eight years in Vancouver, British Columbia, Canada, and has also blown glass in Germany, Italy and Argentina. He moved to Fort Collins in 2010 after discovering The Choice City on a road trip throughout the West. Ratcliffe really liked the atmosphere of Fort Collins and the people and places that make it so special. One of his first introductions to the area was actually working with Norton at his home studio.

“For around 15 years I just tried to confuse my audience, and basically I entertained myself by learning a new thing every day because glass is so vast,” Ratcliffe said. “But it wasn’t good for my collectors and to build a base, so about eight or 10 years ago I said, ‘I am going to focus,’ and I focused on what I call the Road Trip.”

All of his most recent work follows this road trip theme.

“I draw a lot of mountains,” he said. “I do these road trip scenes in my pendants; I put big opal moons in there. Right now I’m working on a series of mugs where I’m drawing and sculpting mountains in the bottom of them.”

Ratcliffe also enjoys the freedom and creative expression that comes with a glassblowing career.

“I haven’t wanted to do anything else — it’s given me the ability to feel like every day of my life is a vacation,” he said. “I graduated in 2001, and I’ve basically been having fun ever since.”
Jason Hedman (@hedmanheadies on Instagram)
Jason Hedman attended Renaissance festivals with his parents as a child and discovered glassblowing while watching artists sculpt dragons and other medieval relics.

Later in life, he was also inspired by the Grateful Dead and saw a lot of functional glass art while following them on tours from 1991-95. Hedman, a self-described “lot kid,” reminisced about traveling from coast to coast with the band, learning about glass along the way.

After the death of Jerry Garcia, the fun came to an end, and Hedman traveled back to his home of Eugene, Oregon.
Eugene was kind of the mecca, and there were only a few people up there (blowing glass), and I fell into a good spot at the right time.” – Jason Hedman
He taught himself to blow glass in Oregon in 1996, working on things like beads, pendants and other jewelry.

“Eugene was kind of the mecca, and there were only a few people up there (blowing glass), and I fell into a good spot at the right time,” Hedman said.

In 1998, Hedman moved to Fort Collins with his partner and newborn baby. Although he still had a passion for glass, his brother was launching a construction business and offered Hedman a job with a steady income. Hedman wanted to ensure his “daughter had a roof over her head and food on the table and the comforts of home.”

This construction job provided security for his family, but glassblowing has always been Hedman’s passion. During his time working in construction, he also owned a school bus that served as a traveling glass shop.

“In the evening time, when it wasn’t cold or I wasn’t tired, I would go in there and start blowing glass to keep my skills up,” Hedman said. “I was working in construction, thinking about what I was going to make that evening when dinner was done and the kids were in bed.”

After a few years, in 2002, his brother moved back to Southern California, and Hedman jumped back into glass as his full-time career. He creates colorful bongs, rigs, pipes, ash-catchers and pendants, although he said he doesn’t have a favorite piece to make.

“It really doesn’t matter what I’m making: As long as there’s creativity to it, I’m happy, I’m content,” Hedman said. “Money follows passion, so I tend to lean toward passion.”