Indica versus sativa: Everything you never wanted to know 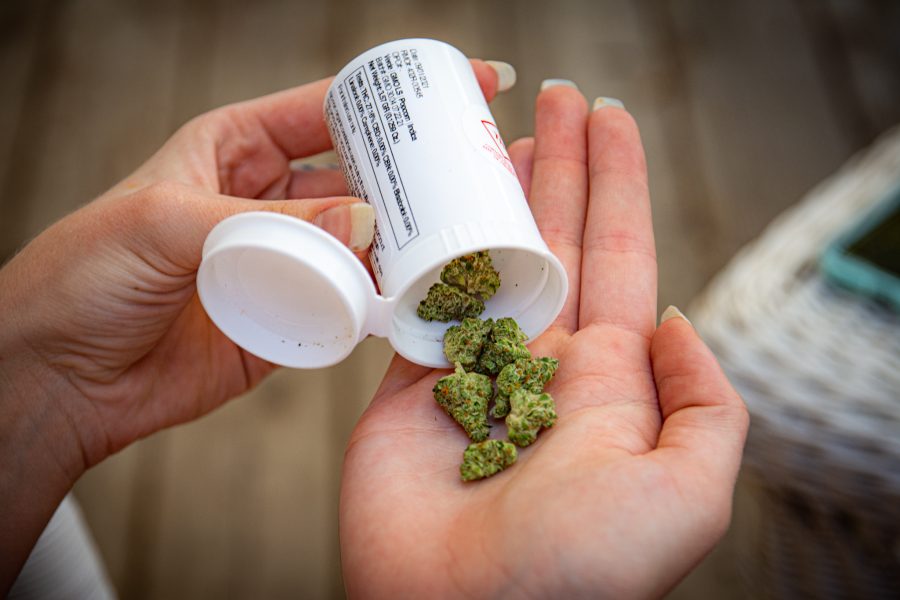 A photo illustration of marijuana buds dumped onto a hand Sept. 6. The marijuana strain was an indica dominant called GMO LS. (Tri Duong | The Collegian)

The world of cannabis can often be confusing and intimidating. Here at The Rocky Mountain Collegian’s cannabis section, we often write articles that attempt to simplify and clarify these sticky details for the layman. This is not one of those articles. This will leave you more confused.

To begin with, cannabis flower comes from the cannabis plant. Cannabis plants are selectively bred for certain traits — often how they look, smell or make you feel. The cannabis flower that can be purchased in dispensaries is derived from generations of crossbred strains. The names often reference their lineage, though there are no established rules for naming strains.

Sativa strains are usually defined in opposition to indica: They may have a lighter, almost yellow color. They may make you feel euphoric, energized and talkative. A commonly made distinction is that indica provides a “body high,” while sativa provides a “head high” and is good for exercise, hiking or household chores.

“Personally, I don’t really call it (energizing) because THC’s not a stimulant like caffeine or anything,” said Thomas, a budtender at Elite Organics who asked that I only use his first name. “But typically, when you smoke a sativa, it’s not going to make you as tired as an indica.”

Hybrids are strains created by crossbreeding indica-dominant and sativa-dominant strains. They have varying effects, so it’s best to consult whoever gave it to you on what it’s supposed to do. They are generally classified as more of one or the other.

Here’s the thing about sativa and indica: While the cannabis industry goes to great lengths to make this all sound quite scientific, it’s actually not. These names are abstract terms that come from an often misunderstood scientific history.

This subject is still debated in the halls of botanical science. Are C. sativa and C. indica really different plants or the same plant adapting to different environments?”

“Everything, technically based on genetics and chemistry, is hybridized,” Thomas said. “Genetics are all very subjective … There hasn’t been any study to prove these things as a fact.”

He’s right — the genetics of cannabis in a post-prohibition world have become impossible to untangle. Human beings have apparently been using cannabis since long before recorded history. It was officially classified by Carl Linnaeus (the guy credited with inventing modern taxonomy) as Cannabis sativa in 1753, from the Latin “sativum,” meaning “cultivated,” and the Greek “kannabis,” meaning “that weed stuff that gets you high.”

A few decades later, Jean-Baptiste Lamarck came into some cannabis from India, which he noticed had darker and more broad leaves and grew significantly shorter. He determined that this was a separate species and called it Cannabis indica. Keep in mind, Lamarck also believed that giraffes evolved long necks by stretching really hard over time.

This subject is still debated in the halls of botanical science. Are C. sativa and C. indica really different plants or the same plant adapting to different environments? Regardless, this doesn’t matter either.

However you taxonomically classify the plants, present-day North American cannabis has been crossbred, interbred and thoroughbred into an unrecognizable freak of nature. Much like corn or watermelon, we’ve genetically engineered it to our purposes to be larger than any naturally occurring plant.

All this to say indica and sativa are basically meaningless terms with no connection to their original scientific meaning. These are subjective judgments made by people who tried the product themselves.

If you ever find yourself in a dispensary, or more likely at the home of an acquaintance, and you feel like being a fun-sucking drip, tell them about all the stuff you learned in the paper. Or simply ask, “Do you feel like this is more of a daytime weed or a nighttime weed?” and use your snoofer to guide you. If it smells good, you’ll probably vibe.