Alternative bong water: We tried it so you don’t have to 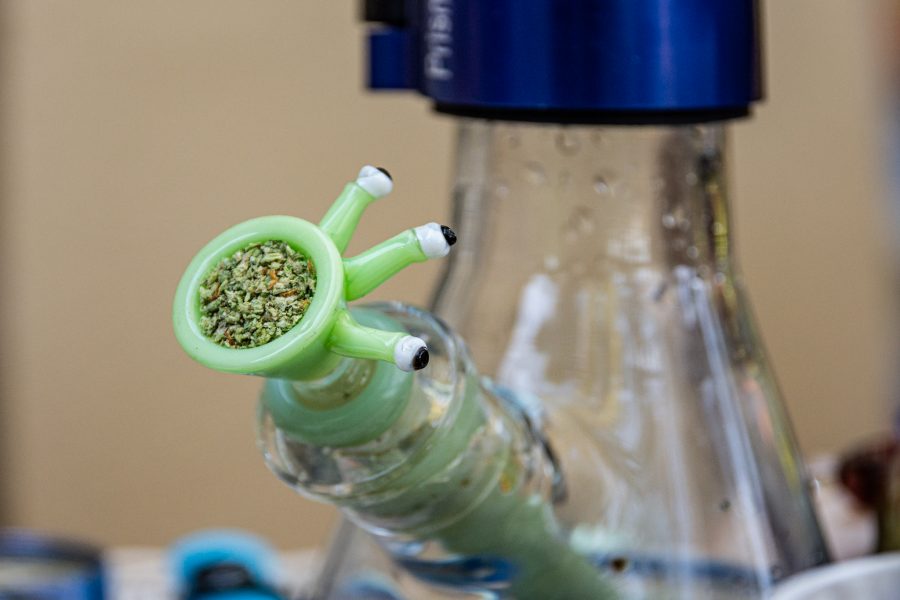 cannabis packed in a bowl that sits in a bong Sept. 7. (Tri Duong | The Collegian)

Last week I set out to put stuff in a bong other than water.

Bongs function by pulling smoke through water, which cools it down to create a much smoother sensation when inhaling. But does the water affect the flavor or consistency of the smoke? Could a superior effect be achieved with something different?

After a bit of brainstorming, we landed on three general categories of liquids.

I first set out to acquire tea from Golden Poppy Herbal Apothecary located in Old Town. They were extremely helpful.

“(Use something) along the lines of herbs that are super aromatic that have a lot of volatile oils that you’re gonna taste because weed is a pretty strong flavor,” the apothecary recommended. I ended up with pure lavender and their signature Happy Tea, a mix of rose petals, holy basil and peppermint, among other things.

We brewed a few ounces of the Happy Tea and haphazardly poured it into the water chamber once it cooled. After our first hit, we found it gave the smoke a certain fragrance and aromatic warmth that could not otherwise be achieved with water.

We likened it to a regular bong hit with a hug-like sensation to the lungs and throat. The peppermint came through in a cheery back-of-mouth cooling sensation, and it provided a subtly pleasant aftertaste.

The lavender tea was similarly smoother than water and definitely came with the calming warmth one would expect from this particular herb. The scent of the tea itself makes it a worthwhile experience.

If you really need to de-stress and seek a smoother, more relaxing bong rip, brew up some herbal tea and find a funnel.

While purchasing the bong, I consulted with the man working the late shift at Munchies Super Market, who told me to try juice — specifically orange and pomegranate. I took his advice.

Despite the insistent recommendation, we found the pomegranate juice to be among our least favorite. The sugary-sour mix tasted a little too alcoholic, and the acidity was a little too much for us. Also, it looks a lot like blood when pooled in a water pipe. If you’re looking for a way to spice up your upcoming Halloween party, this could do it on aesthetic alone.

Orange juice proved a little more successful. Learning from the previous experience, we cut it with water to reduce the acidity. It added a nice citrusy draw to the inhale and was quite reminiscent of breakfast.

I cannot in good conscience recommend pure juice as a water alternative. However, a few tablespoons mixed in can add to the experience.

They said I looked different — changed, even. I spent some time Googling ‘milk in bong death’ but found nothing too worrying.”

Everyone I told about the experiment over the several-day period it was conducted had a suggestion for odd stuff I could put in my bong.

Why not Red Bull, McDonald’s Sprite, coffee or coffee beans — just the beans!?

After a lot of procrastination, it was time for the most cursed part of the experiment. We got some milk, filled the water chamber with it and packed a fresh bowl.

I took a single hit, exhaled the smoke and waited. The familiar feeling of milk-film glazed my mouth and lungs. I hacked in disgust, caught my breath and turned back to my friends.

They said I looked different — changed, even. I spent some time Googling “milk in bong death” but found nothing too worrying.

This left me feeling unaffected, perhaps because some of the fat-soluble THC was lost in the whole milk we were using. Milk bong is a truly horrifying experience that only subtracts. Do not try this at home.

Finally, a friend watched as I peeled open a single-serving cup of applesauce and debated how to get it into the water chamber.

I could not be dissuaded. I had to take it too far.

I spooned the entire cup into the downstem as if feeding a glass baby. Upon a trial draw, we found applesauce alone to be far too viscous, so we mixed in some water.

We shook our heads, packed another bowl and set to it. Still a little shaken up from the milk thing, I gingerly puffed.

Though my mouth and throat were coated with a thick, sugary film, I did not come nearly as close to vomiting. There was a somewhat nice and autumnal flavor that came with the draw, but it was overall outweighed by the harsh back-of-throat cinnamon sensation.

On the plus side, using a thicker liquid eliminates unpleasant splashback. If you too own a cheap bong, using a heavier substance limits the annoying drops of water that can splash on your lips.

As someone who did not like to use bongs before this, I thought that trying a bunch of different substances would offer a new perspective on water pipes. Instead, through trying all of these back to back, I discovered that the best hits always followed cleaning and refilling.

Having to vigorously clean the bong after each use was a solid reminder of the importance of pipe maintenance. As long as you’re not filling your bong with weird stuff, simply rinsing it out after a session will improve the experience 100% of the time. Try tea for a pleasant essence, but other than that, keep in mind that they are called “water pipes” for a reason.