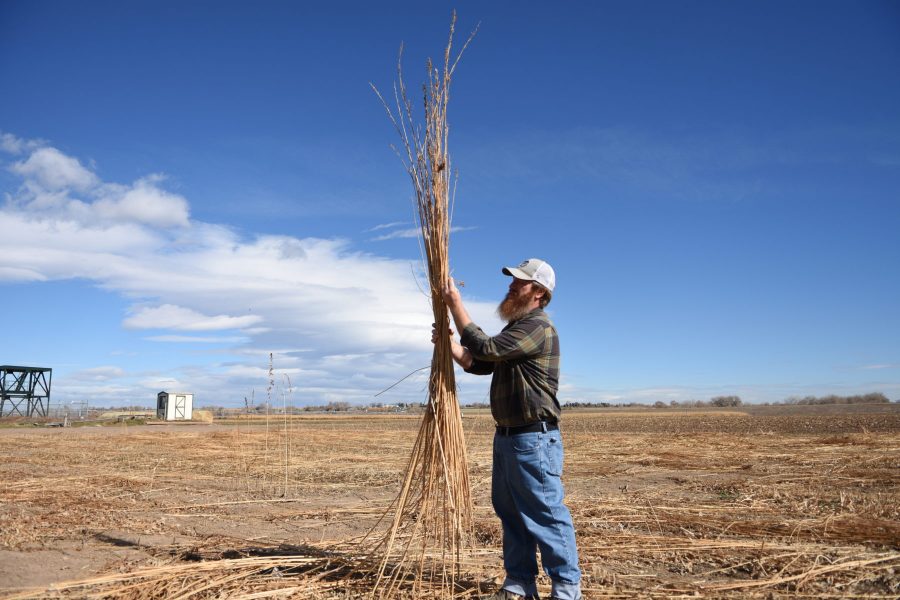 Ph.D. Student and hemp researcher Brian Mitchell holds up a bundle of recently cut hemp plants in a research field at the southern location of the Agricultural Research, Development & Education Center (ARDEC). Mitchell is currently collecting data on the use of hemp as a ground cover plant. (Matt Tackett | Collegian)

With the 2018 Farm Bill recently passed, nationwide legalization of industrial hemp is now in full effect.

This law paves the way for more extensive research, which researchers at Colorado State University have taken full advantage of.

Brian Mitchell, a Ph.D. student in the horticulture department, recently worked on a two-year long study on the irrigation of hemp.

“I was initially focused on working with hemp to develop my research portfolio,” Mitchell said. “After starting on the deficit irrigation study, I realized there was a lot of miseducation around all types of cannabis in general, and I could help change that.”

Mitchell said the research started as an irrigation study. CSU developed the WISE Irrigation Scheduler, a software that tells growers how much to irrigate crops based off of rainfall received, location and crop type. During the study, researchers they planted three different kinds of hemp and used the cloud-based software to see how hemp would grow if they watered it the same as a corn crop.

“If you are a farmer in Colorado, water is often scarce,” Mitchell said. “We wanted to see how different rates of irrigation would affect hemp seed and stalk production. We’re still in the process of data collection and analysis, but we’ll have some interesting results soon.”

According to the National Conference of State Legislatures, hemp is legal in all 50 states, either as a commercial production crop or as research programs. The NCSL also states that the range of industrial hemp products includes soaps, shampoos, fiberglass substitutes, rope, packaging material, animal feed, clothing and fuel.

“In the United States, hemp has to be 0.3 percent THC or less,” Mitchell said. “Industrial hemp is grown for seed and fiber, usually with the same crop at the same time.”

Mitchell said hemp grown for CBD is managed in a completely different way than industrial hemp. CBD is derived from hemp plants grown specifically for their high-CBD and near-zero THC content. He said it is Christmas tree-shaped to optimize bud development. Industrial hemp, in contrast, is more upright, planted more densely and is grown for seeds or fiber, often at the same time.

The Congressional Research Service shows that the United States imported $67 million of hemp products in 2017, and those numbers are predicted to continually increase. These statistics in industrial hemp create a cash crop for existing and new farmers alike.

“Our Pueblo campus houses the Institute of Cannabis Research, and they received a lot of funding for cannabis research, which includes hemp,” Mitchell said. “At CSU, we conduct genetic research on hemp and have professors developing real-world solutions for the industry as well. A lot of it comes down to awareness, we’ve got to actually talk about it.”

Mitchell said at a federally funded land-grant university, researchers often don’t want to take on risky stuff. But project head and research manager, Abdel Berrada,  of the Southwestern Colorado Research Station saw a need to serve eastern Colorado hemp farmers and set aside funds to do so.

“(Berrada) wanted to create resources to help grow a crop that needs a lot of research, especially here in the U.S.,” Mitchell said. “Since hemp was lumped in with marijuana, there’s no understanding of the differences between them. But it’s just another crop, and we need real-world solutions for it.”

CSU also researches other benefits of hemp. Whitney Cranshaw, a professor and specialist in the department of bioagricultural sciences and pest management, had an active program with the insects of the crop.

“The work I am doing is to try and identify what are the insect pest management issues with this new crop and to try and develop appropriate ways for growers to deal with them,” Cranshaw said. “The first phase of this has been to describe what insects are in hemp – that has never been systematically done before in North America and has been the main focus of the work Melissa Schreiner (my graduate student) and I have been working on.”

Legislation allowing commercial production indicates that insect pest research, like that of Cranshaw’s and Schreiner’s, is vital now more than ever.

Linc Thomas can be reached at entertainment@collegian.com and on Twitter @LincThomas1.