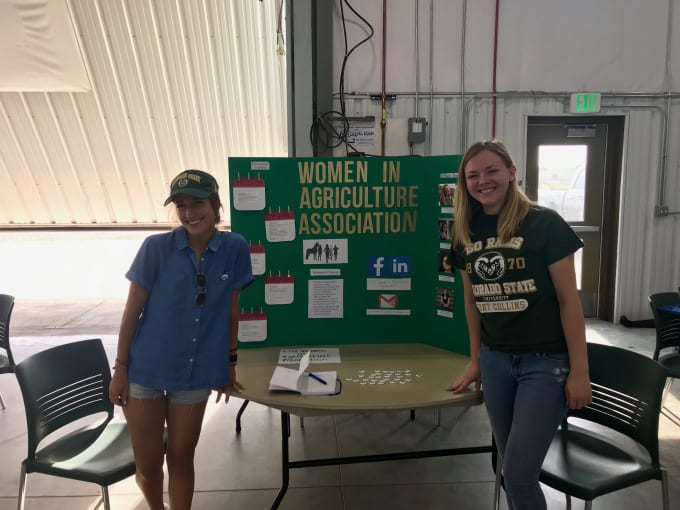 “While the College of Agricultural Sciences has an impressive portfolio of clubs, I think one thing that sets ours apart is that we are not targeted at one specific major,” Childers said. “We want to build a network of people across all disciplines to appreciate the contribution women make to modern agriculture.”

Women in Agriculture seeks to break the racial and gender stereotypes of the agriculture industry.

“We truly believe in the importance of the role women play in agriculture,” Childers said. “We wanted to create a place where we can build women up and prepare them for a workforce where women are still not equally represented in leadership positions.”

Women in Agriculture meets in Shepardson 102 at 5 p.m. on the first and third Tuesday of every month. The club is open to anyone seeking to learn and uplift women in the agricultural industry.

Margo Rasmussen, a junior in the horticulture program and member and officer of Women in Agriculture said she is proud to be a member of the organization simply because it is the start of something new, and something that is necessary.

“Colorado State University has been around since 1870 … it is long overdue that a club such as this is offered,” Rasmussen said. “The Women in Agriculture Association works to make the opportunities that are out there made known — to let women know that they do not have to stand on the sideline and watch as the world changes, but that they too can take a stand and make a difference on their own.”

A recent publication by The Washington Post revealed that 58,000 jobs in the agriculture sector in the U.S. become available every year and only 61% of those jobs are filled annually. Women in Agriculture could be a vital factor in promoting female leaders in the farming sector, not only in Colorado but the rest of the country.

“Farming has been and remains a largely family business,” Childers said. “This means that wives, daughters and sons are often contributing to the farm as well. So in some ways, farming has been diversified for a long time. While there is still room for improvement, in my experience I have found that the desire to diversify and support people of all backgrounds in agriculture is actually very prevalent.”

Linc Thomas can be reached at entertainment@collegian.com or on Twitter @lincthomas1.