The Rocky Mountain Collegian • May 3, 2018 • https://collegian.com/articles/aande/fortcollinslife/2018/05/hitting-people-with-sticks-how-to-destress-through-live-action-role-play/

Hitting people with sticks: How to destress through live action role play 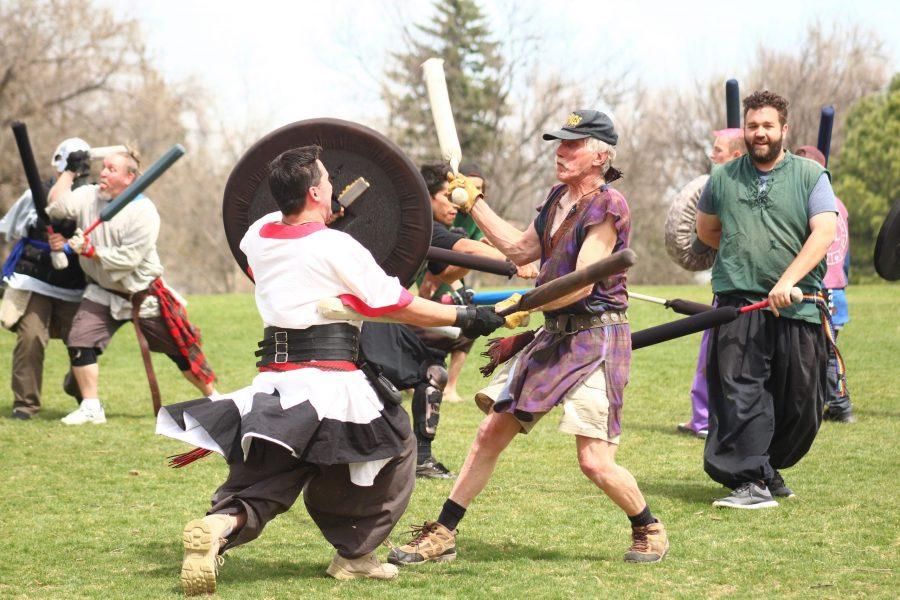 A man that goes by the name Storm Reaver is a member of the Fort Collins Amtgard group that practices their battling skills as they LARP (Live Action Role Playing) at city park on Sunday April 29th, 2018. The Fort Collins Amtgard group is a medieval style sword fighting group that is the third largest group in North America. Members of the group meet every Sunday at city park and the event is open to the public. (Matt Begeman | Collegian)

Every Sunday in Fort Collins, countless people fall victim to sword and arrow, but in this world, it’s all for the sake of fun.

Members of the City Park chapter of Amtgard, a non-profit organization centered around live-action role-playing, meet weekly to engage in medieval-themed combat and to practice ancient arts and sciences with a fantasy base.

“We have mundane names and the names we use at the park. It’s like a persona,” Said Krista Kirkpatrick, or Dash, depending on the realm in question.

The mundane names Kirkpatrick references are derived from “mundania” or the outside.

“We meet every Sunday in City Park,” Kirkpatrick said. “There are other parks that do Saturdays and some on Sundays.”

Most other parks or chapters are also under the helm of Amtgard but the chapters aren’t limited to Colorado.

“There are a lot of parks all over,” Kirkpatrick said. “We have a couple of parks in Canada and basically anywhere there is a military base with a couple of people who want to LARP.”

According to Kirkpatrick, those other parks are open for mutual play with chapters around the nation.

Additional information for City Park and other chapters can be found on amtgard.com as well as in their Facebook group “Fort Collins Amtgard”.

Fresh off a trip to Texas with other Fort Collins LARPers, Kirkpatrick said that her group was immediately welcomed by LARPers in the Lone Star State, even if there was some surprise.

“We were kind of renowned going down there (to Texas),” Kirkpatrick said, citing the 16-hour drive as the biggest point of amusement to the Texans.

But for members of the LARPing community, the therapy of LARPing can extend beyond a break from reality.

“I’m a combat veteran and we have a lot of guys who are veterans or just have general life problems,” Said Donald Colvin, a 13-year veteran of LARPing and also a veteran of the U.S. Army. “Coming out here actually helps people.”

The general life problems that Colvin refers to can range anywhere from mental disabilities to feelings of being misunderstood.

“There is a guy in Colorado Springs who has Asperger’s and this actually helps him focus,” Colvin said before talking about transgender involvement at Amtgard. “There are a lot of people in that community who come out here because they are accepted right away.”

Most of the LARPers referred to themselves as a nerd, used as a point of pride and inclusion, but the diversity of the players was easy to note from the start.

A man who went only by ‘Storm Reaver’, his character name, has been LARPing in Fort Collins for over 19 years and was the oldest person on the field, in terms of ‘mundania age’.

“They did a demo at Loveland high and my oldest son was a student there,” Storm Reaver said. “(My son) said ‘dad you’ve got to check this out’ and so him, his younger brother and I came out to the park.”

While Storm Reaver started LARPing with his two sons, they eventually moved away due to work commitments. Storm Reaver continued his LARPing escapades and says he will continue to do it as long as he can, citing numerous reasons for why he plans to keep LARPing.

“Every day at the park there is usually something that stands out as a great moment,” Reever said. “A great place to just hang out with people and drop mundania.”

Collegian reporter Carson Lipe can be reached at entertainment@collegian.com or on Twitter @carsonlipe.