The Great Salmon Famine is making waves in alt music 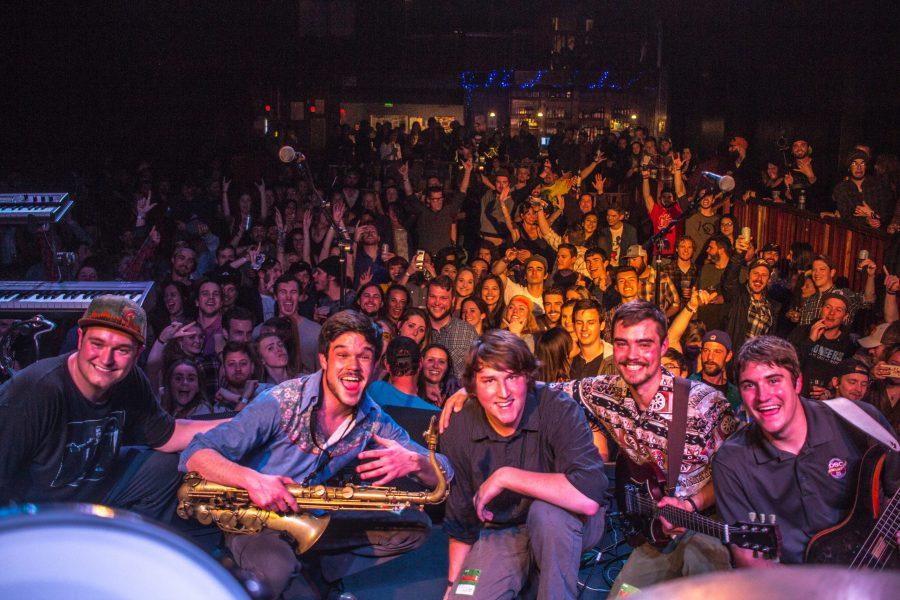 The Great Salmon Famine has one rule: don’t take yourself too seriously.

The Fort Collins-based band and 2018 Bandwagon Magazine Battle of the Band Champion is made up of Adam Bell, Camden James, Gabe Neymark, Jack Vulcani, Evan Waring and a collective love of grooving.

Although many of their songs tend to delve on the funky side, the band does not limit themselves to classifying their work into one genre. Instead, the band says, they play ‘fun music’.

“I ask a lot of friends after our shows, ‘What would you describe us as?” James said, who plays drums for the band. “(They say,) ‘Funky, jazz, weird rock.’ Definitely weird, at least for a few songs on each set, you know, depending on the set of course. We are not going to get weird at a fundraiser unless they ask.”

The band began during a college jam session between Waring, Vulcani and Neymark in 2016. After jamming to one of Vulcani’s riffs that would later become their latest 2018 single, “The Funky Circus,” the men decided to start The Great Salmon Famine. From houseshows to bars to venues, they have not stopped since.

According to The Great Salmon Famine’s website, “GSF designs their high-energy repertoire to include something for everyone, with smooth transitions encompassing many different musical styles. GSF wants you to dance.”

“We are a band that is really a team unit,” said Neymark. “It’s so team driven and so balanced, there’s not really one person who you could say is the band leader. I think that has its own uniqueness.” -Gabe Neymark

The band’s original songs bear no consistent motifs of strife or lovesickness or heartbreak, but rather tend to tell vivid stories. The themes of each song range from space adventures to hibernating bears to easy breezy Sunday listening. According to the band, they have a song that is strictly to get the party started called “Throw Me Your Jammies,” a combination of two songs they ultimately decided to marry, “Throw Me The Money,” and “Put On Your Jammies.”

“We have a couple songs named after cats,” said Waring, who plays guitar for GSF. “Some that are still alive, some that have moved on to another state or that we miss dearly. Those songs really embody the personalities of those cats, which is pretty neat.”

Neymark, who plays guitar and writes lyrics for the band, said the creative process to write a GSF song all starts with an image.

“I read a lot of Doctor Suess as a kid,” Neymark said. “And I used to be in musicals. I think it’s just fun to think up stories or think up content. A lot of the time when writing the lyrics, the first thing that happens is that I will be playing chords or a riff and an image comes to my head and I go off of that image and just start creating a story from it.”

Besides their outside-the-box music style, including kazoo solos, colorful lyrics and the collective goal of bringing audiences the urge to dance, the members of The Great Salmon Famine also pride themselves on the friendship and unity they share between them.

“We are a band that is really a team unit,” said Neymark. “It’s so team driven and so balanced, there’s not really one person who you could say is the band leader. I think that has its own uniqueness.”

Vulcani, who plays bass for the group, said the men’s close band dynamic allows them more room for creativity and risks within their music.

“We get really experimental, and don’t judge when someone tries to throw in something very, very strange into the song,” said Vulcani. “We have a song called The Funk Circus, and when you listen to it, it’s classified under the circus genre, we are playing carnival music on stage and people seem to like that. We like to get really experimental to the point where we don’t know if people are going to hate it or not but we just go on stage and play it and see if they are going to like it.”

According to James, the groups ease with each other translates to their energetic stage presence.

“Adam, our saxophone player, is kind of our frontman when we are playing onstage,” James said. “He does a lot of the talking, and he kind of just goes for it and yells out goofy things sometimes, the majority of the time, and we absolutely love it. People will giggle along with us. When we are playing together, we like to smile at each other and really engage with each other a lot, and I think people really like seeing that. And, of course, we are having a blast, too.”

All members of the band are Colorado State University alumni, with the exception of Bell, who transferred from CSU to the University of Northern Colorado. The band has shifted from balancing classes and music to balancing careers and music, which marketing alumni Waring said is a possible feat until they get the chance to achieve the goal of doing music full-time.

The Great Salmon Famine will be playing a The Aggie Theater Thursday, September 6. A complete list of their upcoming September shows can be found on their website. Their music can be streamed on their Bandcamp website as well as Youtube, and the new single, “The Funky Circus,” can be streamed on Spotify and Soundcloud.